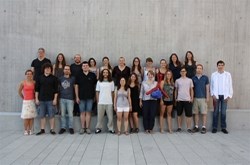 The research iGEM team of the Albert-Ludwigs-University Freiburg, Germany presents their newly developed “Microarray Xeroxing” technique to the Jury in Boston. A technique with which just a few drops of blood are enough to detect many different diseases simultaneously, quickly, and cost-effectively. The 19 students received financial support for their project from German microplate reader manufacturer BMG LABTECH.

This year, 280 teams from all around the world take part in the competition which is organized by non-profit organization iGEM (international genetically engineered machine). The teams work all summer long on their synthetic biology projects. From September 24th to 28th all participants present their results at the Hynes Convention Center in Boston, USA.

Amongst others, the Freiburg University team is sponsored by German microplate reader company BMG LABTECH. “The fast detection and differentiation of diseases is a crucial and fundamental task. With its project the young research team makes a great contribution to this topic. We support the students to enable as many participants as possible to travel to the award ceremony in Boston,” says Tobias Pusterla, the company’s International Marketing Manager.

The aim of the project is to propose an advanced procedure for the parallel detection of various antibodies, or disease markers, in a fast and inexpensive manner with just one syringe of blood. The approach is based on the interaction of antibodies with the respective antigens immobilized on the surface of a microarray. Antigens derived from various pathogens are generated by cell free protein expression using the corresponding DNA array as a template, and are arranged in distinct spots on the protein array. Placed in a microfluidic chamber the protein array gets incubated with the patient’s blood sample. The interaction between an antibody in the sample and the immobilized antigen results in a small but significant increase of the thickness of the microarray’s surface layer. The detection is realized by a technology called iRIf (imaging Reflectometric Interference) which offers a label-free and real-time measurement and no further biochemistry is needed. By cost- and time-effective simultaneous screening for several diseases, the proposed system offers a strong potential to improve future diagnostics.

The iGEM competition is an annual, worldwide, synthetic biology event aimed at undergraduate university students, as well as high school and graduate students. At the Giant Jamboree, iGEM teams compete for various awards. These awards range from Medals to Track Awards to Special Prizes for the finalists. The three finalists will be selected based on their overall excellence of their entire project, from choice of project, presentation, to the success and impact of the project, to consideration of issues of Human Practices.