Understanding how lithium reacts to pressure developed from charging and discharging a battery could mean safer, better batteries. 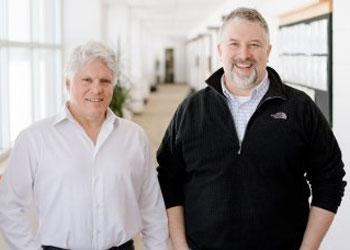 Stephen Hackney, professor, and Erik Herbert, assistant professor, both of materials science and engineering, research the properties of lithium at the nanoscale to understand how the metal reacts under pressure with an eye toward improving solid-state batteries. Image Credit: Michigan Tech

There’s an old saying: “You must learn to walk before you learn to run.” Despite such wisdom, numerous industries skip the basics and sign up for marathons instead, including the battery industry. Lithium ion batteries hold incredible promise for improved storage capacity, but they are volatile. We’ve all heard the news about lithium ion batteries in phones—most notably the Samsung Galaxy 7—causing phones to catch fire. Much of the problem arises from the use of flammable liquid electrolyte inside the battery. One approach is to use a non-flammable solid electrolyte together with a lithium metal electrode. This would increase the energy of the battery while at the same time decreasing the possibility of a fire. Essentially, the destination is building next generation solid-state batteries that don’t go boom. The journey is to fundamentally understand lithium.

“Everybody is just looking at the energy storage components of the battery,” says Erik Herbert, assistant professor of materials science and engineering at Michigan Technological University. “Very few research groups are interested in understanding the mechanical elements. But low and behold, we’re discovering that the mechanical properties of lithium itself may be the key piece of the puzzle.”

Michigan Tech researchers contribute significantly to gaining a fundamental understanding of lithium with results recently published in an invited three-paper series in the Journal of Materials Research, published jointly by the Materials Research Society and Cambridge University Press. The team includes Herbert and Stephen Hackney, professor of materials science and engineering, along with Violet Thole, a graduate student at Michigan Tech, Nancy Dudney at Oak Ridge National Laboratory and Sudharshan Phani at the International Advanced Research Centre for Powder Metallurgy and New Materials. They share results that underscore the significance of lithium’s mechanical behavior in controlling the performance and safety of next generation batteries.

Lithium is an extremely reactive metal, which makes it prone to misbehavior. But it is also very good at storing energy. We want our phones (and computers, tablets and other electronic devices) to charge as quickly as possible, and so battery manufacturers face twin pressures: Make batteries that charge very quickly, passing a charge between the cathode and anode as fast as possible, and make the batteries reliable despite being charged repeatedly. 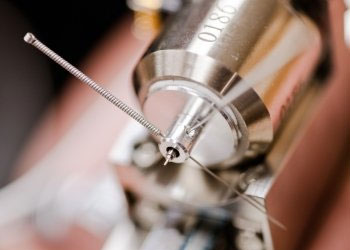 The diamond-tipped probe Herbert and Hackney use for their research is incredibly sensitive and must be housed in a compartment that muffles any sort of vibrations. Image Credit: Michigan tech

Lithium is a very soft metal, but it doesn’t behave as expected during battery operation. Mounting pressure that inextricably occurs during charging and discharging a battery results in microscopic fingers of lithium called dendrites to fill pre-existing and unavoidable microscopic flaws—grooves, pores and scratches—at the interface between the lithium anode and the solid electrolyte separator.

During continued cycling, these dendrites can force their way into, and eventually through, the solid electrolyte layer that physically separates the anode and cathode. Once a dendrite reaches the cathode, the device short circuits and fails, often catastrophically. Herbert and Hackney’s research focuses on how lithium mitigates the pressure that naturally develops during charging and discharging a solid-state battery.

Their work documents the remarkable behavior of lithium at submicron length scales—drilling down into the lithium’s smallest and arguably most befuddling attributes. By indenting lithium films with a diamond-tipped probe to deform the metal, the researchers explore how the metal reacts to pressure. Their results confirm the unexpectedly high strength of lithium at small-length scales reported earlier this year by researchers at Cal Tech.

Herbert and Hackney build on that research by providing the inaugural, mechanical explanation of lithium’s surprisingly high strength.

Lithium’s ability to diffuse or rearrange its own atoms or ions in an attempt to alleviate the pressure imposed by the indenter tip, showed researchers the importance of the speed at which lithium is deformed (which is related to how fast batteries are charged and discharged), as well as the effects of defects and deviations in the arrangement of lithium ions that comprise the anode.

Drilling down to understand the behavior of lithium

In the article “Nanoindentation of high-purity vapor deposited lithium films: The elastic modulus,” the researchers measure the elastic properties of lithium to reflect changes in the physical orientation of lithium ions. These results emphasize the necessity of incorporating lithium’s orientation-dependent elastic properties into all future simulation work. Herbert and Hackney also provide experimental evidence that indicates lithium may have an enhanced ability to transform mechanical energy into heat at length scales less than 500 nanometers. 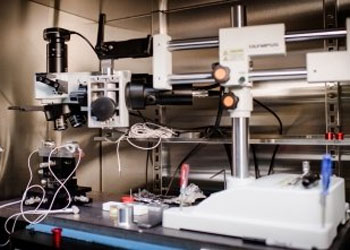 The Olympus microscope system Herbert and Hackney use to perform indentation procedures on lithium films. The films, because they are extremely reactive to air and water, must be handled in a sealed compartment filled with argon gas. Image Credit: Michigan Tech

In the article that follows, “Nanoindentation of high-purity vapor deposited lithium films: A mechanistic rationalization of diffusion-mediated flow,” Herbert and Hackney document lithium’s remarkably high strength at length scales less than 500 nanometers, and they provide their original framework, which aims to explain how lithium’s ability to manage pressure is controlled by diffusion and the rate at which the material is deformed.

Finally, in “Nanoindentation of high-purity vapor deposited lithium films: A mechanistic rationalization of the transition from diffusion to dislocation-mediated flow,” the authors provide a statistical model that explains the conditions under which lithium undergoes an abrupt transition that further facilitates its ability to alleviate pressure. They also provide a model that directly links the mechanical behavior of lithium to the performance of the battery.

“We’re trying to understand the mechanisms by which lithium alleviates pressure at length scales that are commensurate with interfacial defects,” Herbert says. Improving our understanding of this fundamental issue will directly enable the development of a stable interface that promotes safe, long-term and high-rate cycling performance.

Says Herbert: “I hope our work has a significant impact on the direction people take trying to develop next-gen storage devices.”