A new method of exploring chemical space could help create scientific breakthroughs in areas including drug design and discovery, its creators say. 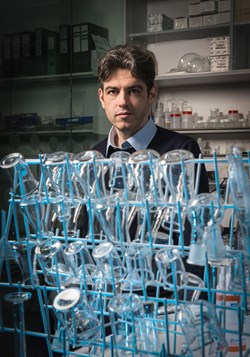 The concept, known as assembly theory, is outlined in a new paper published in the journal Science Advances by a team from the University of Glasgow’s School of Chemistry.

Assembly theory allows scientists to turn molecules into molecular trees, like a family tree identifying the parents and offspring, and the technique can be experimentally and computationally verified.

The team, led by Professor Lee Cronin, used assembly theory to explore chemical space – the term scientists use for the vast pool of potential combinations of molecules and chemical compounds.

Every known chemical has a unique position in chemical space. Some, like DNA, have developed naturally through evolution, while others, like many medicines, have been created through experimentation in laboratories.

Assembly theory provides scientists with the ability to break molecules down into their constituent parts and to find new ways to combine them with other molecules which have similar parts.

The process is analogous to breaking words down into letters, then shuffling the letters to make new words. It offers chemists a more structured approach to discovering new molecules, which often requires time-consuming trial and error before useful combinations are found.

In the paper, the team describes how they used their assembly theory approach to explore the class of drugs known as opiates -  powerful but addictive painkillers that can be deadly when misused.

New forms of opiates which are just as effective in treating pain but less potentially dangerous could offer doctors new approaches to patient care.

On a computer, running their assembly theory algorithm, the team grouped nine natural and synthetic opiates together. The system broke the molecules into smaller parts known as assembly pools and explored combinations of the pools until a route could be found which could build all the opiates in the group.

By taking the parts common to all the opiate assembly tree routes, the team was able to invent new opiates by combining the parts together in slightly different ways to keep the overall shape of the molecule but explore new architectural types.

In this way, the discovery process can explore new potential drug types, but keep some of the key features required for the drug to be active. Further exploration in the future could lead to the development of new types of painkillers that are less addictive.

Professor Cronin said: “Chemical space isn’t just big – it’s staggeringly vast. There are more potentially drug-like molecules to be explored than there are stars in the observable universe.

“What assembly theory gives us is a helping hand to navigate that chemical space by working backward from known molecules. By breaking them down into their constituent parts, we can develop our understanding of how they were created and how they can be combined to create new compounds.

“It removes a lot of the guesswork that has characterized the process of chemistry until now, and could potentially streamline the process of developing new compounds for use in medicine. We are particularly excited about the potential new opiate candidates that this technique has found.”

Don’t miss our video interview with Prof. Cronin on The Scientists' Channel® >>