AACR President David A. Tuveson says clinicians will be ready and waiting before the cancer appears in the future 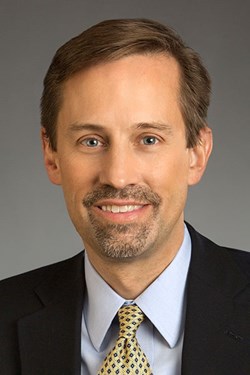 It’s time to change current approaches to pancreatic cancer. Instead of reacting to cancer, clinicians should be in a position, ready to treat, before the first cancer cells appear, according to AACR President David A. Tuveson, MD, Ph.D., FAACR.

“Wayne Gretzky always said he skated to where the puck should be, which is how he became the most prolific goal scorer in hockey,” Tuveson said. “Most players follow the puck and try to skate a little faster to get there first, which is how we treat pancreas cancer today. Gretzky didn’t follow the puck, he went on the ice to where the puck should go. We, as a community, should be moving toward where we think the cancer puck will go because that’s how we reduce cancer mortality by half in the next 25 years.”

Tuveson combined Gretzky’s predictive approach to hockey with current approaches to pancreas cancer research during his Presidential Address at 5:30 p.m. CDT on Sunday, April 10th, in La Nouvelle Orleans C at the convention center. Tuveson is the Roy J. Zuckerberg Professor of Cancer Research and director of the Cancer Center at Cold Spring Harbor Laboratory. He is also chief scientist at the Lustgarten Foundation, the world’s largest private funder of pancreatic cancer researchers.

Cancer research is at an inflection point, Tuveson explained. President Biden has called for a 50 percent or greater reduction in cancer mortality within 25 years and backed that call with increased funding and the Advanced Research Projects Agency for Health.

“Reducing cancer mortality by half is a big change,” Tuveson said. “For the cancer community to make that change happen, we have to think about things differently. I’m going to spend my Presidential Address using pancreas cancer as the example of how we can do that.”

The first step in the three-pronged approach is earlier detection so therapies that work well in early disease can be used at even earlier stages. In pancreatic cancer, surgery is still the primary approach. Early-stage therapies for pancreatic cancer are not yet available.

The second prong is improved therapies. In lung cancer, that means targeted therapies, immunotherapies, and more effective chemotherapies. None of these approaches are widely available for pancreatic cancer as of yet.

Prevention is the third prong.

“When you say, ‘Stop smoking to prevent lung cancer,’ people get it,” Tuveson explained. “When I talk about preventing pancreas cancer, people get a funny look because they’re not really sure what they can do to prevent it. If we’re going to skate to where the puck will be, we need help from cancer researchers in early detection, treatment, and prevention to get us there. Moving to where cancer will be is the extra push that will get us to that 50 percent reduction in mortality.”

Find the daily coverage of AACR by SelectScience by clicking here >>