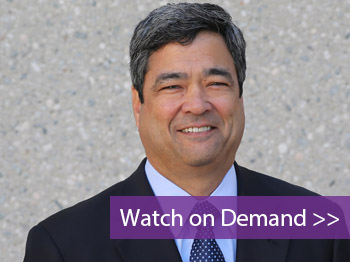 In this on-demand SelectScience webinar, Dr. Phil Koerner, from Phenomenex, focuses on reversed-phase chromatography and best practices for selecting a reproducible starting point for your initial method development.

Koerner presents tips to help you leverage HPLC and UHPLC column particle morphologies to improve or optimize a specific aspect of your separations. He also discusses separation tradeoffs such as maximizing the relative speed of analysis of your method, versus the need for increased selectivity or compound retention. He also shares ways to improve reproducibility through robust method development and techniques to ensure reproducibility through the lifecycle of the method.

Find highlights from the live Q&A session below or register to watch the webinar any time that suits you.

Q: I've switched from a 5 micron fully porous column to a 2.6 micron core-shell column but I'm seeing a loss of sensitivity. How could I overcome this?

PK: If we switch to a core-shell column as a replacement for a traditional five-micron column and we don't see that increase in performance, there are a couple of things that we can focus on.

One is as we move to higher efficiency materials, and that’s true for core-shell but also even as we move to UHPLC-type materials, the system volume is going to be much more significant when moving from 5 micron to core-shell 2.6 micron, than we would have observed moving from 5 micron to fully porous 3 micron. We want to pay attention to what's going on with our system and try to minimize some of the extra column volume contributions from the connecting tubing. Some of our HPLC systems are plumbed with really large ID tubing, so take a look at that and reduce the internal diameter where possible. Where using excessive lengths of connecting tubing, reduce that to only what is necessary.

We also have to pay attention to a couple of other things. Higher efficiency means narrower peaks. Along with narrower peaks, this means that if we're only collecting data at a certain frequency, we may not be collecting enough data points across the peak to measure it accurately. You can fix this by going to your detector settings and increasing the data acquisition rate. You want to collect somewhere between 15 and 20 data points across the peak. If your peak is 20 seconds wide, one data point per second is adequate. But when your peak is now five seconds wide, that data acquisition rate is not adequate. When the observed peak is seen to be narrower, you're going to start to realize some of those efficiency benefits, which is, in turn, going to translate into the expected sensitivity benefits.

Q: How does the lifetime of the Kinetex® core-shell columns compare to fully porous columns?

PK: They're very comparable. I go back to being careful and using guard columns. I'm a huge proponent of guard columns because they do help to protect the column. They trap any potential contamination. 5 micron, and 10 micron columns are a little bit more forgiving in that if we inject a dirty sample, it may not come back to haunt us very quickly, but as we move to higher efficiency materials, including core-shell columns, we have to pay a little bit more attention to what I would refer to as chromatographic hygiene. We need to make sure we filter our samples to remove particulates, do sample prep where it makes sense, and use guard columns or even inline filters to trap micro particulates and keep those from damaging the columns and impacting column performance and lifetimes.

Core-shell columns, by the very nature of the particle morphology, have a narrower particle size distribution than the corresponding fully porous material. This translates into tighter packing inside the column which contributes to their higher efficiency, but also means that they’re a little bit less forgiving when it comes to injecting, for lack of a more eloquent word, garbage into our column. The lifetime should be comparable and using guard columns will help us to achieve that.

PK: The answer to this is generally, no. The reason for that is that when we move from low pH to high pH, basic compounds will become more hydrophobic. They're going to become more neutral in charge. When a compound is more hydrophobic, it's going to retain longer through increased interaction with the C18 stationary phase, changing the elution profile. Instead of eluting early in the chromatogram, it's going to elute later in the chromatogram. Under gradient conditions, higher pH for basic compounds is going to result in later elution, meaning higher organic concentration is required to get those compounds to elute.

Q: If the retention times of early eluting peaks in gradient runs are irreproducible, what could be causing this?

PK: The first thing that comes to mind is re-equilibration of your column. Here, I'm assuming a gradient separation. At the end of the gradient, you should return to the original mobile phase conditions. We want to make sure that the column is fully re-equilibrated before we make the next injection. If it's not, that could lead to those early eluting peaks, which are weakly interacting with the stationary phase, resulting in variable retention because of the column not being fully re-equilibrated.

If you're still running into that interaction, I would recommend looking at, especially if you’re using a C18 phase, using a C18 phase that contained a polar functional group. The polar surface-modified materials that we highlighted here with Luna® Omega Polar C18 and Kinetex Polar C18 are two potential solutions. Others, such as polar embedded or polar end-capped type C18 phases, might offer a potential solution as well because they would increase the interaction with those early eluting compounds and, by definition, more polar compounds. That would help to stabilize the overall retention.

Learn more about leveraging HPLC and UHPLC column particle morphologies to improve your separations: Watch this webinar on demand>>