Watch this on-demand webinar to expand your knowledge on particle characterization, Raman microscopy, fluorescence, and SPRi 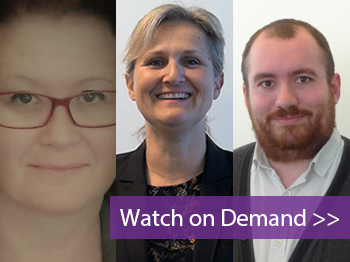 In this webinar, Nathalie Vollmer, Christelle Mégier and Thibault Brulé, from HORIBA Scientific, discuss these different techniques and their application in life sciences and pharmaceutical research. The potential of these techniques is also illustrated through different application examples for bacteria and protein analysis.
Read on for highlights from the live webinar’s Q&A session or register to watch the webinar on demand>>

Q: Can you comment on the impact of storage conditions on degradant formation in culture media?

CM: If culture media are not stored in the dark, light degradation catalyzes tryptophan degradation, which in turn reduces cell viability and growth. Several groups have reported looking at screening methods to detect various degradants, which are often byproducts of tryptophan, tyrosine, and riboflavin.

Q: What is the main advantage of the absorbance, transmittance and a fluorescence excitation emission matrix (A-TEEM) method when applied to pharma solutions?

NV: We showed that insulin sequences varying by only one or three amino acids can be differentiated by intrinsic fluorescent A-TEEM. In the study, we showed that the A-TEEM methods can be used to characterize protein therapeutic formulation and aggregation behavior, even under conditions where there are only small differences in the protein sequence. The A-TEEM method is a good way to characterize such proteins where traditional fluorescence methods may fail. For future applications, an A-TEEM fingerprinting technique could be used for the characterization of other protein therapeutics, such as vaccines, inhibitors, or antibodies.

Q: What are the main differences between surface plasmon resonance (SPR) and SPR imaging (SPRi)?

NV: The main difference between these two techniques is the number of ligands we can immobilize on the sensor chip. With SPRi, we can immobilize hundreds of molecules, hundreds of ligands, on the same sensor chip. In this configuration, it is possible to follow, in real time, the interaction between these molecules and the different targets in parallel. Therefore, this saves time because you can immobilize many ligands on the biochip and can get the results very quickly compared to classical SPR.

Q: Is it possible to reuse SPRi sensor chips?

Q: What are the benefits of EDF compared to standard DF elimination?

NV: EDF is more interesting in the sense that it is composed of a specific condenser with a specific design that has been patented. Thanks to that, we managed to maximize the scattered signal from nanoparticles or nano-objects, and we can improve the detection limit and the signal ratio to get a better image contrast. This can be either used with a spectral imaging system or Raman imaging.

Q: Is the Raman study of biological samples dependent on excitation regarding the source and slit width of the spectrometer?

TB: Most of the time, biological samples are fluorescence so the Raman signal will not depend on the laser source that is used. However, what will impact the spectrum will be the fluorescence coming from the samples. In that case, you have to choose your excitation source in order to reduce its fluorescence and so the fluorescence can be reduced by playing with the slit width of the spectrometer.

NV: Yes, you can have a DLS detector that can be coupled with SEC technology. In this case, with SEC, you will make a separation and then the DLS will allow you to evaluate the size of the monomer or dimer or trimer without any difficulty. However, when you use the DLS device alone, it will be impossible to get a separation of the different populations, because the technology itself will measure a global signal. SEC will allow you to separate the particles, but DLS alone will not have the capability to be resolutive on a sample with a mix of monomers, dimers, and trimers.