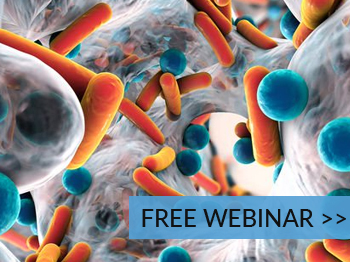 Multidrug-resistant organisms (MDRO) are bacteria that have developed resistance to multiple types of antibiotics, capable of causing infection and adapted to spread easily. Infections with MRDOs are becoming an increasing problem worldwide, accounting for higher mortality rates and higher cost of therapy.

In this on-demand SelectScience webinar, Dr. Jose Alexander, Director – Clinical Microbiologist at AdventHealth Orlando, discusses two key considerations when tackling the pressing issue of multidrug-resistant organisms. Firstly, resistance mechanisms, with an emphasis on beta-lactamases and how they are evolving, and secondly, the search for effective therapies, including the importance of accurate MIC results and the impact on positive patient outcome.

Read on for highlights from the live webinar Q&A session or watch the webinar on demand.

Q: Could you explain why you include first-line and anti-MDRO antimicrobials on panels and which panels did you use?

JA: The sooner we can screen and identify an organism, being able to provide drugs for therapeutic use is key, especially for the success of the clinical outcome of the patient. We use a custom VITEK® panel card that can screen for some of the first lines of treatment in bacteria and a panel of non-fermenters that is also able to screen for some of the organisms when they become resistant to antimicrobials.

Ideally, we use a panel that can accommodate a group of drugs that is useful for a screening, but also for the treatment if the organism is susceptible. However, a group of drugs that is always used as a second line of treatment if the organism has a resistance mechanism can reduce the turnaround time for screening confirmation and susceptibility testing from 48 hours to 24 hours. So that would be the ideal scenario.

Q: Can accurate BMD MIC results improve time to effective treatment by ensuring the most appropriate drug is chosen right at the beginning?

JA: Broth microdilution is a standard. At almost every single platform in the market, they use broth microdilution. The ideal testing situation is to be able to have the most accurate result available for screening. We can use the MIC as a routine screening for many of the resistant organisms and then we use confirmation for some of them. We don't use confirmation on ESBL MIC anymore. We only base it on the phenotypic distribution of MIC, based on the key antimicrobials, which is why we've been able to reduce the turnaround time on ESBL MIC from 48 to 24 hours. Having access to a very accurate MIC and to be able to validate some of the thresholds for some of those MIC based on the resistant mechanism can help to have a faster and more accurate report for multidrug-resistant organisms.

Q: Are you able to predict resistance mechanisms in bacteria?

JA: Predicting resistance mechanisms is difficult but we can confirm and have a high presumption of what kind of resistance is present. We know by our validation that we can identify ESBL and probiotic screening based on confirmation of validation with the regular double-disk diffusion method, otherwise known as the Etest method. This is a highly presumptive screening test that we do: the carbapenemase confirmation.

A non-fermenter is a little more difficult. Upon susceptible pseudomonas that is treatable with carbapenems, especially meropenem, you will see the pseudomonas two or three days later becoming resistant to meropenem or imipenem both at the same time, or even affecting other classes like aminoglycoside or fluoroquinolone. This is because we know that for a non-fermenter, the resistance can cross two classes, especially for the multidrug-resistant bacteria. However, it’s possible to predict the resistance mechanisms. We did that before with the pseudomonas for our pediatric patient - a cystic fibrosis patient. The resistance building was predicted and what will happen later, but the prediction is a little more difficult. I think that is why we need a rapid and accurate confirmatory test.

Q: How can we tackle beta-lactamase resistance in hospital patients?

JA: One way is reinforcing the infection prevention protocol. It’s very important that infection prevention plays a huge role to avoid beta-lactamase resistance to continue spreading. The second thing is to have a laboratory that can quickly and accurately identify and report the clinically significant organism. We want to avoid over-isolating patients unless the doctor requires isolation, but we need to be able to identify those patients with high ESBL in organisms that don't carry anything. I think it's important that the laboratory get back to the routine screening and identification of resistant mechanisms because even when some of the guidelines indicate that you just need the MIC, you don't need to do testing for drug use, only for epidemiological purposes. Waiting for infection prevention to call us to screen is a waste of time. I think we should be proactive and be able to do preliminary screening post-laboratory and be able to report back as soon as possible and allow infection prevention to decide which patients need to be isolated.

Q: Do you know anything about the interplay between bacteriophage stages versus antimicrobial resistance (AMR)?

Q: What is your opinion on Ampliclox (a mixture of ampicillin and cloxacillin)?

JA: Cloxacillin is known to be an inhibitor of AmpC, and I know that there is a combination with cloxacillin that can be used to identify AmpC from ESBL in the laboratory. We don't have that in America, so we don't have access to that. I will say I know that there are some studies that show that some inhibitor dosage shouldn't be used against extended-spectrum beta-lactamase, but we don't know at what point cloxacillin should be able to inhibit AmpC. If this is the focus of the question, cloxacillin is a good inhibitor of AmpC.

Q: Do you think the automated AST systems work efficiently?

JA: That is an interesting question. I think that we're just looking for a single point from the whole landscape. What we've been using them for a long time and it’s working but I don't think that it is ideal. I think the AST is biased against the person who performed the test, against the colony that we picked from the place, and we're only seeing just a minute sample of the whole population of organisms that can be seen. We should be doing average screening of multiple organisms from the same species and different morphologies of colonies to be able to pick the most resistant one and to be able to know the threshold and the minimum or maximum that we can use. When it comes to AST, I think we're only seeing just a small drop in the whole ocean of what the problem is with the susceptibility test in the population of organisms, especially if it's polymicrobial.