Expert Insight: All antibodies are not created equal: Comprehensive profiling of SARS-CoV-2 antibodies 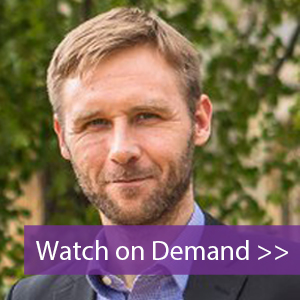 Prof. Tuomas Knowles, Professor of Chemistry and Biophysics at University of Cambridge

Detecting antibodies that confer effective immunity is crucially important to understand a patient’s immune response to SARS-CoV-2. In particular, the ability to quantify the virus-neutralizing capacity of the immune system is key to supporting the development of suitable vaccines and antibody-based treatments such as convalescent plasma therapies.

Prof. Tuomas Knowles, Professor of Chemistry and Biophysics at University of Cambridge, outlines Fluidic Analytics’efforts in assessing the immune response in COVID-19 patients by use of a novel microfluidic in-solution immunoassay platform. With this new approach, Fluidic Analytics were able to comprehensively profile SARS-CoV-2 antibodies directly in minimally diluted serum of these patients.

TK: In principal, affinity is really the sort of key physical parameter that determines the strength of an interaction. Based on the type of data that we've obtained for the sort of infectious disease area looking at the COVID-19 situation, what this highlights is just how heterogeneous this immune response is. It's very likely that this is going to be the case in many other infectious diseases but also areas such as autoimmune disease, for example.

We think that this is a key parameter, which is effectively important in all areas where the adaptive immune system is implicated. We believe it's a very general area and, of course, immuno-profiling itself has become a very key area, and currently has largely been done using sequences and nucleic acid-based technologies, doing T cell sequencing and even B cell sequencing.

We're very excited about being able to do some of these types of experiments on a protein basis and being able to provide fingerprints of the immune response. We do this by looking at the functional interaction —  the interaction in this case is the antibody with its antigen — and deconvoluting that into the fundamental parameters of affinity concentration fingerprints.

Q: Do you see affinity-based neutralization assays replacing the conventional cell-based ones?

TK: At this stage, we think of this as being complementary and additional information. I presented some data to demonstrate the type of data we are finding and we’re also receiving very accurate and sensitive data in relation to our cell culture experiments. What was good was we received the same accuracy in the data but in a fraction of the time. It's minutes instead of days to get what's effectively the same information. We're very excited about the potential of this because this might ultimately even be used, for example, for matching donors and recipients of plasma for plasmapheresis treatments. This, of course, is currently not viable because, from a clinical point of view, the decision for treatment has to be taken on a timescale which is shorter than the currently available measurement timescales of several days.

In the short term, we're very excited about providing complementary information but I think in the longer term there's a possibility that this might, at least in some cases, replace more conventional measurements.

Q: I don't quite understand why the background doesn't interfere with the measurement of the target molecule complex. Can you please elaborate on this a little bit more?

TK: Instead of doing conventional surface-based measurements like ELISAs, you would do measurements of protein interactions. The measurement itself is sensitive to anything that lands on the surface. Therefore, molecules that would be in the solution if you bring in a sort of example of moleculization. In a situation like this, all of these sort of gray molecules here, which are not actually participating in the interaction that we're interested in, would still give a background signal, because they would have some nonzero affinity to the surface base on which the measurement is done.

Q: Is it possible to do a competition assay with a peptide?

TK: With the experiments that we're currently looking at, we're very optimistic that it’s possible. That is very interesting for looking at potential therapeutics if one could look at these sorts of competition assays. We do have some proof of principle experiments, but I don't have the data here. If we look at some of these neutralization experiments, they are conceptually competition assays. For example, this type of experiment here is actually a competition assay. The spike protein from base to receptor with being competed out by an antibody.

The experiment that you're proposing is sort of replacing this antibody with a peptide. Yes, in principle, with these in-solution measurements we can do exactly that. I think that's another area where being able to do measurements in solution is very nice because it doesn't get more complicated when you add more proteins into the complex. We just measure the size of one of the species and it's relatively robust to whether it's a binary interaction, a ternary interaction or quaternary interaction. This is something that is more difficult to do on a surface, where you have to start to worry about all of the possible background interactions.

Q: That is how do you avoid nonspecific binding?

TK: There are two types of nonspecific binding. In a conventional surface-based experiment, there's nonspecific binding to the surface itself. This is what gives a background signal which is very challenging to eliminate, and that's what makes it so difficult to do affinity profiling using conventional analyzing. For example, using the clinical samples. As discussed in the context of the question that was raised earlier, that contribution is simply gone in our measurements because we don't do the measurement on the surface. Even though there is interaction, there is still nonspecific interaction, as we still have some of these nonspecific background molecules interacting with a surface, it just doesn't influence the measurement, because we're not measuring on the surface where the optical signal really comes in solution.

The second type of background interaction is actually not an artifact but a real interaction. For example, if one of these species also competes with, say, the blue interaction partner. That's of course something which is a real effect and something that we would see in this assay. That’s the same interaction that would happen in the biological system, so if there are other molecules in the patient’s serum that compete with, for example, the spike protein, then this is something that we actually want to measure. So that's not an artifact, that's a real interaction.