Editorial Article: Vote for the Best New Clinical Laboratory Products of 2017 in the Scientists’ Choice Awards

To be in with a chance of winning a $500 Amazon voucher, cast your vote by July 23 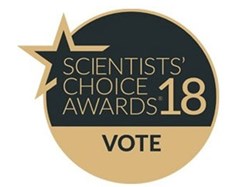 Clinical scientists and healthcare professionals across the globe are being encouraged to have their say in the Scientists’ Choice Awards®.

Now in their 10th year, the prestigious Scientists’ Choice Awards celebrate the very best laboratory technologies, as nominated and chosen by clinical scientists and healthcare professionals around the world. They give scientists a chance to recognize the manufacturers whose innovations have done most to help advance their work.

Why vote? Not only will a Scientists’ Choice Award give your favourite instrument or kit the recognition it deserves, it will also spread the word to your peers around the world to help them purchase the best lab equipment, enabling them to achieve better outcomes. Additionally, all voters are entered into a prize drawing for the chance to win a $500/£400/450€ Amazon voucher.

Find out which products scientists around the world have nominated below:

Kerry Parker, Editor-in-Chief of SelectScience which runs the awards, said: “The Clinical Scientists’ Choice Awards are going from strength to strength and it was great to see more nominations this year than ever before.

“These awards are unique in our industry because the winners are chosen by the people who know best – the clinical scientists and healthcare professionals using the products to improve patient outcomes.”

The winning products will be recognized as having significantly contributed towards clinical laboratory efforts and improved healthcare in 2017 and will be announced at a special party during the 2018 AACC Annual Meeting & Clinical Lab Expo in Chicago, USA, on August 1.

SelectScience, the leading independent online resource for the global scientific community, launched the Scientists’ Choice Awards 10 years ago to enable scientists to voice their opinions on the best laboratory products. Once a year, SelectScience invites members to nominate their favorite products of the year in each category.