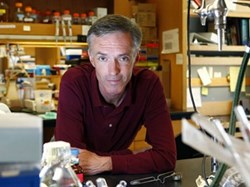 Bringing together engineers and biologists at the forefront of medical research, synthetic biology enables scientists to harness and rewire the function of living cells. This field has huge potential, therefore, to revolutionize the way we diagnose, treat and manage human disease. At the upcoming 2018 AACC clinical symposium and exposition in Chicago, world-renowned expert Professor Jim Collins is set to deliver a much-awaited plenary speech on the fusion between synthetic biology and CRISPR technology. In this SelectScience interview, Collins, Professor at MIT, the Broad Institute, and the Wyss Institute at Harvard, shares an exclusive insight into what this exciting and emerging field promises to deliver, and how a new technology platform, ‘SHERLOCK’, can rapidly detect and diagnose disease.

The Collins lab is focused on two key areas of research: synthetic gene networks and antibiotics. “We’re using advanced CRISPR technologies to develop next-generation diagnostics and therapeutics for human infectious diseases, both bacterial and viral. This type of synthetic biology offers us novel platforms to truly harness the power and diversity of molecular biology,” explains Collins.

As the team strives to push the boundaries of clinical diagnostics, it has at its disposal some truly cutting-edge kit. Initially unveiled in 2017, SHERLOCK (Specific High-sensitivity Enzymatic Reporter unLOCKing) is a CRISPR-based platform that was co-developed between the Collins lab and Professor Feng Zhang’s team based at the Broad Institute and MIT, who conducted some of the earliest work on CRISPR optimization in human cells, back in 2011.

Synthetic biology offers us novel platforms to truly harness the power and diversity of molecular biology.

In contrast to CRISPR/Cas9 however, SHERLOCK is centered around the activity of Cas13a/C2c2, which is distinct in two predominant ways: “Firstly, Cas13a targets RNA instead of DNA. Secondly, when Cas13a recognizes its target and is activated, it degrades non-targeted RNA in its vicinity,” says Collins.

“We have exploited this off-target capacity to develop a highly specific diagnostic platform for detecting nucleic acids, such as those unique to bacteria and viruses, antibiotic resistance genes, and even cancer mutations.”

The team working on SHERLOCK at the Broad Institute and MIT originally developed the diagnostic tool to not only identify, but also quantify genetic signatures from Zika and Dengue viruses, on a simple and inexpensive paper strip. Recent developments in the technology, to be discussed in Collins’ talk at AACC, have allowed them to refine the technique further to enable identification of multiple molecular targets, as well as amplification of the detection signal for increased sensitivity.

“The beauty and simplicity of this CRISPR-based diagnostic tool is that the tests are performed ex vivo, eliminating the worry associated with using genetically modifying enzymes in humans,” Collins adds. “We’re further developing the technology platform and hope to move towards appropriate clinical trials in the very near future.”

Along with advances in the SHERLOCK platform, Professor Collins will also be discussing their wider efforts in synthetic biology. Make sure to attend his talk on Wednesday, August 1, 8:45am-10:15am, to hear about some of the most fascinating and innovative advances in clinical diagnostics.

Catch the SelectScience coverage of AACC by visiting this page, and follow us on social media for live updates from the exhibition floor