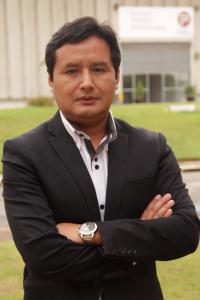 Lung cancer accounts for a staggering 23% of the global cancer burden. Around 55% of those diagnosed with localized tumors will survive five years, although rarely are lung cancers identified at this early stage. Once metastasized, less than 5% of individuals will survive five years. The particularly aggressive nature of the disease, therefore, necessitates more effective treatment and monitoring regimens.

That mission is what drives healthcare professionals at the Hermes Pardini Institute in Brazil, who are striving to improve patient outcome with liquid biopsies, using some of the most innovative DNA detection technology: droplet digital PCR, or ddPCR. At the annual AACC meeting in Chicago, our editorial team spoke to Dr. Elvis Cueva Mateo, head of R&D at the Hermes Pardini Institute, Brazil, to capture some of the exciting new data presented in his poster session, and to consider what these momentous advances in lung cancer diagnostics could mean for the future of cancer care.

The conventional approach to diagnosis and staging involves invasive tumor and lymph node biopsy procedures, which frequently cause physical and psychological stress to the patient.  Yet, as Mateo explains, “the detection of cell-free tumor DNA in plasma could enable characterization of tumors in the same way, from a simple blood test.”

Not only are liquid biopsies less invasive, but the technology is sensitive enough to detect tiny fragments of circulating tumor DNA in blood, which enables the monitoring of minimal residual disease for patients in remission.

Yet perhaps the most considerable advantage that this technology offers, from a diagnostic perspective, is the ability to identify the genetic profile of tumors and detect resistance to therapy. The inherent instability of cancer is such that the genetic profile of each tumor changes over time, often frequently and rapidly, fostering therapeutic resistance. Monitoring disease in real time with ddPCR, however, provides new hope in overcoming this unrelenting feature of the disease.

We can introduce a rapid change of treatment before the severity of the disease progresses .

“Liquid biopsies performed with ddPCR allow us to identify mutations in patients on therapy and introduce a rapid change of treatment before the severity of the disease progresses. In more traditional methods, we would only investigate and discover mutational changes after onset of clinical symptoms of disease progression, such as recurrences and mestastasis,” explains Mateo.

According to Mateo, previous data has shown that three common mutations of the EGFR gene in non-small cell lung cancer — T790M, L858R, and chromosome 19 deletion — if present, dictate the type of treatment that is most beneficial to the patient. For example, third-line tyrosine kinase inhibitors, such as afatinib, have been shown to improve outcomes in patients harboring the T790M mutation.

At the Hermes Pardini Institute, samples from non-small cell lung cancer patients were analyzed using Bio-Rad’s droplet digital PCR platform and compared to the results of other commercially available liquid biopsy tests. The goal was to provide a comprehensive comparison of the available options, and to validate this approach in the diagnosis and monitoring of aggressive non-small cell lung cancer. Blood samples were collected in PAXgene tubes, processed within 24 hours, three days and 7 days after blood collection. The plasma was stored at -80◦C until cfDNA extraction, that used a specific cfDNA kit (QIAamp Circulating Nucleic Acid - QIAGEN). cfDNA was then stored at -20◦C until ddPCR analysis. 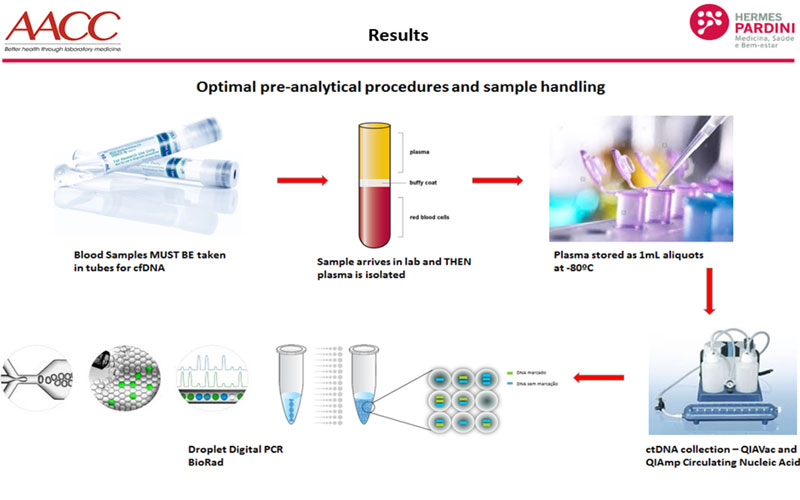 Schematic representation of the liquid biopsy service at Hermes Pardini Institute
Summarizing their results, Mateo said: “We were initially surprised to learn that Bio-Rad’s technology produced fewer positive results than other assays employed in the study. However, when the tests were repeated with the same samples, in all methodologies, it became clear that the other technologies showed inconsistent results that could be false positives. In contrast, the ddPCR results remained the same across all repeats, suggesting that this is a much more reliable analysis of low-level, cfDNA in the plasma.”

Clearly, this technology presents itself as a platform to explore further in cancer diagnostics. The team at the Pardini Institute has also expanded these studies to other types of cancer and mutations besides EGFR, such as JAK2, a gene that is highly mutated in some leukemias and breast cancer.

Mateo firmly believes that once this type of technology becomes more accessible to public diagnostic departments, clinicians will begin to tackle the increasing lung cancer burden on the global population — saving lives with earlier intervention.

Download the study overview here, and read more about the ddPCR technology used below.