Learn how a diagnostic testing company in the U.S. is meeting the increasing demand for patient safety in medical cannabis products

Ever since the medicinal properties of cannabis and its components were first recognized in pain relief for a wide range of ailments, debates about its safety have loomed large. Not least of these concerns has been the quality of the cannabis product administered and how its components transform during use, for example under heating. In the U.S. private sector, some states have been slower than others to adopt regulations, and Arizona has been the last to enshrine in law the requirement to fully test all finished cannabis products against a wide range of parameters. With those new regulations not coming into force until November 2020, one company – Level One Labs – is poised to take advantage of the emerging market for cannabis testing in Arizona and is already ahead of the game. Working out of its labs in Scottsdale, Arizona, Conner Griffeth is Level One Labs’ Chief Operating Officer and co-founder, and a passionate advocate of patient safety. He is very excited about what the future holds for Arizona’s medical cannabis industry.

The team at Level One Labs run a  state-of-the-art testing facility, operated by cutting-edge scientists, they aim to pave the way in Arizona's cannabis testing. Image courtesy of Level one Labs.

Griffeth notes that the state of Arizona has something of a “wild west” reputation when it comes to medical cannabis, though that is all about to change with the passing of the new Senate Bill 1494 which sets down legal requirements for the quality assurance testing of cannabis products. “Arizona has the third-largest market in U.S.A.,” Griffeth says, and Level One Labs is set to capitalize. “When we opened our doors, there was no mandatory testing requirement,” he says.

But Griffeth is motivated more than anything by patient safety, with a patient base of 200,000 in Arizona alone. “Patients with immune deficiencies, or those undergoing chemotherapy – they are the people who can’t afford to take bad products,” he says. “They shouldn’t have to question the safety of their medicine.” He points out that if just 10% or 20% of Arizona’s patient base is immunocompromised, those are not insignificant numbers, and adds: “We have a lot of patients being touched here. So, they deserve the best medicine, the best quality and while they may not be getting that currently, we're racing towards it.”

Griffeth cites a well-known example of the care that has to be taken in cannabis testing because of the unique need to heat the final product in some way, for example through smoking, vaping or cooking. While many pesticides used on crops leave residues that are non-toxic at room temperature, exposure to heat can lead to the generation of highly unpleasant toxic compounds and increased safety concerns where pesticides are present at high levels post-cultivation: “The most famous case is the common fungicide myclobutanil. It’s stable at room temperature but when heat is applied, it turns into hydrogen cyanide,” Griffeth says.

And that is where analytical technology comes in. With the new Senate Bill requiring testing for potency, residual solvents, pesticides, microbials and heavy metals, any laboratory poised to take advantage needs an impressive suite of equipment. 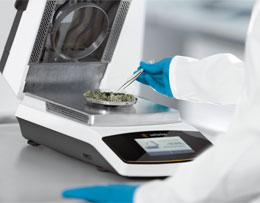 Get to know the value of Sartorius moisture analyzers for use within the Cannabis testing environment. Visit www.sartorius.com/cannabis-testing

Level One Labs uses a wide range of classical analytical equipment, including HPLC (for potency analysis), GC-MS (for terpenes and residue analysis), real-time PCR (for microbial testing) and ICP-MS (for heavy metals). But it is the versatility of Sartorius’s Mark 3 Moisture Analyzer and range of high-performance analytical balances that have helped Level One Labs overcome some key process bottlenecks, as Griffeth attests: “Moisture testing on the flower was a key bottleneck until we realized we were able to add more heating elements, just like Lego bricks. We have added two, and we can add up to four on there.”

It is perhaps the analytical balances that have had the greatest impact, since Level One Labs is dealing with minuscule changes in weight brought about by the loss of very volatile components. This requires the Sartorius balances which are accurate to four decimal places, and which came to be in the lab after a year’s due diligence work on balances in which Griffeth toured other U.S. company labs to uncover potential problems. He testifies to their value: “They run an ISO calibration twice daily. They [Sartorius lab balances] are just great, robust systems. I haven't had any issues with them. They're used daily, several hours a day for a year now and there have been no issues whatsoever. They’re used across all safety testing, and they’re great machines.”

Future of cannabis testing in Arizona

Griffeth is looking forward to the “regulation and normalization” of cannabis testing that the new Senate Bill will bring to Arizona. It has been a challenging area because the federal government does not sponsor cannabis research. This means that there have been no validated, nationally recognized tests that companies like Level One Labs can rely on: “We’ll see an end to the ‘wild west’. The free market will drive this, with accreditations to become state-licensed laboratories. This will eliminate labs with questionable practices,” Griffeth says.

He is looking forward to a time when “legitimate labs will be given the chance to grow” and concludes by expressing his excitement at “watching the whole Arizona medical cannabis program grow and become safer.”

For more expert opinions on cannabis testing, visit our dedicated video playlist on The Scientists' Channel.