Once considered a vestigial organelle, primary cilia are now believed to have an important function in the central nervous system 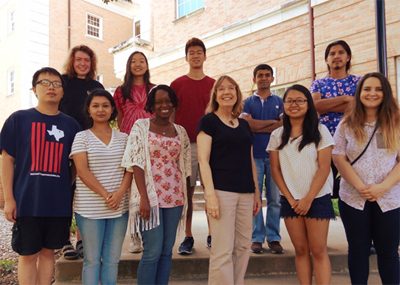 While its common knowledge that neurons communicate with each other through an intricate network of axons, dendrites, and synapses, a less-explored aspect of neuronal communication is its sensory response to the surrounding environment. A specialized appendage called primary cilium, found in neurons throughout the brain, is thought to contribute towards rich sensory and signaling systems within neurons. Not too long ago, however, these very cilia were considered to be functionless.

In this exclusive SelectScience® interview, Dr. Jannon L. Fuchs, Professor at the University of North Texas, shares her lab’s chance encounter with neuronal cilia and describes how it led to unexpected revelations in respect to their role within the central nervous system.

The importance of ubiquitous neuronal cilia

“We rediscovered primary cilia completely by accident when using an antibody that wasn't staining what it was supposed to,” explains Fuchs. “Instead, it highlighted the fact that every neuron seemed to have one primary cilium. Our mission now is to look at cilia in the brain and understand what they do at different stages of cell development, cell differentiation, and cell birth.”

Fuchs continues: “Although neuronal cilia were first discovered 40 years ago on electron micrographs, the antibodies made it clear that they were more common than expected.” Once considered vestigial, many neuroscientists currently remain unaware of the presence of cilia in every neuron. Upon examining other vertebrate classes for neuronal cilia, the Fuchs lab came to the conclusion that these cilia have probably been around for 400 million years. “We just knew they weren't vestigial,” says Fuchs. “My lab has been interested in this topic since 1999 when we first made this observation.” 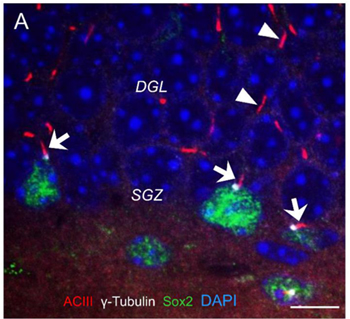 The fortuitous finding that pivoted research projects in the Fuchs lab came about while studying chronic pain. “We were testing a new technique to measure the turnover of phosphatidylinositol, a second messenger, in brain and spinal cord slices after injecting mice with Freund's adjuvant, a common model to study pain,” says Fuchs. “We found that the isolated spinal cord slices from these animals were actually cycling the second messenger faster.”

In further examining the G-protein, the most likely candidate to be upregulated as a result of this sensory stimulus, the Fuchs lab tested an antibody against the G-protein alpha-11 subunit (G11α), which ultimately turned out to become a method to recognize and study primary cilia instead. Upon performing the necessary positive and negative control tests with mutant mice, the Fuchs lab now had a technique to better examine neuronal cilia. “We began looking at cilial morphology and abundance across cell types,” notes Fuchs. “We noticed that the cilia were longer in cells closer to ventricles, suggesting that they're possibly responding to signals in the cerebrospinal fluid."

Given that cilia are closely associated with cell division, the Fuchs lab is working on the hypothesis that neuronal cilia play a role in the development, maturation, and survival of neurons through the Sonic Hedgehog signaling pathway. Fuchs continues: “One of our bigger research questions is: why does the neuron still have a cilium? While astrocytes can divide under certain circumstances, neurons can no longer divide. So, the cilia must have another function. To look into that, we performed experiments using a mutant mouse that was missing a receptor that is common on cilia. We found that these mice were much more susceptible to epilepsy and seizures. It’s possible that neuronal cilia regulate membrane potential and, in turn, protect neurons against excitotoxicity.” 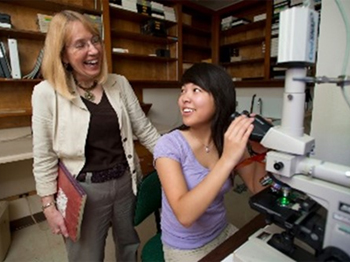 Essential tools for the precise and accurate study of cilia

A key technique used in the Fuchs lab is immunostaining. “We predominantly perform immunohistochemistry to localize cilia and learn about their morphology and chemistry,” explains Fuchs. “Often, we need to pipette fractions of a microliter. These need to be accurate, especially because the antibodies are very expensive. Precise pipetting is a vital part of our work.”

Fuchs continues: “We spend a lot of time working with pipettes and learning how to precisely get accurate sub-microliter measurements of antibodies. From experience, we know that it’s not trivial to get reliable pipette tips. So, we are very glad to have come upon the Biotix pipette tips. We find that they are a good match for our Rainin pipettes.”

The role of cilia in clinical and translational research

The findings from basic research projects in the Fuchs lab will eventually feed into translational applications in the future. “There are so many applications to clinical research here. The scientific community has only just begun exploring these ideas to apply them to disease,” notes Fuchs. “For instance, we believe that cilia keep neurons out of the cell cycle. In Alzheimer’s disease, however, there is evidence suggesting that neurons try to go back into the cell cycle, replicate DNA and then die. So, we’ve now started examining Alzheimer’s disease tissue to investigate potential defects in cilia.”