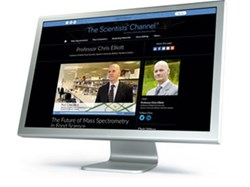 The Scientists’ Channel (www.thescientistschannel.com) is a revolutionary new platform that places scientists and their work first. Never has there been a complete video platform for scientists to present their work, share innovations and expertise, and publicize their organization — until now.

From SelectScience®, the global online science publisher, The Scientists’ Channel is the perfect place for scientists to broadcast their videos to a worldwide audience through a fully moderated, trusted and independent platform. The content covers a wide spectrum of scientific fields, from mass spectrometry and cell culture, to drug discovery and clinical laboratory diagnostics. The platform is funded through sponsorship by industry, academia and scientific societies.

SelectScience’s President and CEO, Arif Butt, says: “The Scientists’ Channel is the very essence of scientists communicating innovation. We are proud to be collaborating with many fantastic scientists who are sharing their knowledge through video and I look forward to welcoming many more onto the platform in the near future.”