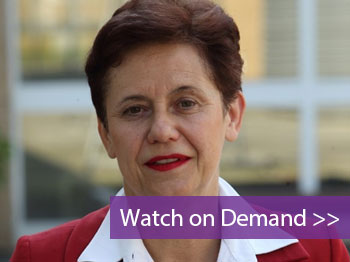 Lucia Banci, Professor of Chemistry at the University of Florence

NMR spectroscopy can provide unique contributions for the description of cellular processes, as it is suitable not only for characterizing the structural and dynamical properties of biomolecules but also for describing transient interactions and functional events with atomic resolution possibly in a cellular context. This requires the development of suitable methodologies capable of addressing multiple, specific, and sometimes non-conventional aspects for describing functional processes in cells.

In this on-demand SelectScience® webinar, Prof. Lucia Banci, University of Florence, describes how the power of NMR can be harnessed for describing cellular pathways at atomic resolution in a cellular environment. Banci presents examples for pathways responsible for cellular copper trafficking and for the biogenesis of iron-sulphur proteins.

Through an integrated approach, by increasing the complexity from single protein structures to protein complexes to the functional reaction steps, these processes are described in their cellular context within a molecular perspective. Furthermore, the exploitation of UHF NMR spectrometers, such as that operating at 1.2 GHz for in-cell NMR applications, is explored.

The webinar is introduced by Dr. Rainer Kuemmerle, Vice-President at Bruker Biospin and Head of NMR Applications, who talks briefly about the development of the world-first NMR system operating at 1.2 GHz magnetic field, which is installed at Florence University.

Read on for highlights from the live webinar’s Q&A session or register to watch the webinar on demand.

Q: Which technique is most effective for the detection of NDMA, LC-MS or GC-MS?

LB: Not particularly, except in a few cases where there are specific folds of metal binding, especially when proteins are very small and with a lot of ligands. They have an arrangement that determines the fold by the binding of the metal. We found folds that are widespread and present in many other types and classes of proteins and the protein acquired the ability to bind to the metal. In some proteins, they retain two functions, the specific fold and the ability to bind the metal. The fold is not the immediate way to recognize whether a protein is metal binding or not, it has more to do with the organization of the specific metal-binding site. The presence and number of potential ligands for metal ions can then indicate if it is a metal-binding protein or not.

Q: Considering that 30% of the human genome is metal-binding proteins, what fraction of these is actually paramagnetic?

Q: Do iron ions in the sample solution self-orientate in the ultra-high magnetic field?

LB: We have the TCI and I hope soon we get the TXO. Now, we collect data with proton detection, but we do want to apply carbon detection, and, direct detection of 15N. We have had very good results, so we look forward to collecting data on our samples.

Q: Does magnetic field strength affect the health of cells used in the in-cell NMR experiments?

LB: In in-cell NMR, we are working on proteins in the cytoplasm that are moving freely, because if they weakly interact with the membrane or with other very large components then their motion will slow down, the lines become broad and we do not detect them. This is magnetic field independent; we have tested it at 950 MHz and we have tested at 1.2 GHz and we see that, particularly for structured proteins, we have a huge improvement going to a higher field, in terms of sensitivity, resolution and TROSY effect. nitrogen-15 TROSY in a cell improves  a lot because it is theoretically much better than at a lower field. However, there is no self-orientation, no problem in that respect. For larger proteins with intrinsic homogeneity in the sample, improvements will not be as large as in intrinsically disordered proteins which are much more mobile and so have sharper lines.