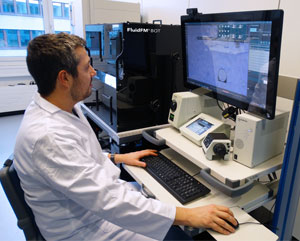 With traditional delivery methods, such as lipofection or electroporation, the success of CRISPR-Cas-mediated gene editing is often less than optimal due to poor cell viability and low transfection efficiency rates. Furthermore, precision editing by homology-directed repair (HDR) occurs at even lower ratios. This is especially critical when working with rare or hard-to-transfect cells such as iPSCs, neurons or cardiomyocytes, making genome editing tedious.

To overcome these hurdles, guest editor, Dr. Paul Monnier, field application scientist at Cytosurge, tells us about FluidFM technology and how it’s improving CRISPR delivery. By gently delivering all the required components directly to the nucleus of the cells, this technology provides scientists with a state-of-the-art tool to enable significantly enhanced gene editing rates, optimized on/off-target effects and easy multiplexing of CRISPR mutations.

FluidFM technology unites microfluidics and force microscopy by introducing microscopic channels into force-sensitive probes. This unique combination enables the handling of liquid volumes at the femtoliter scale, as well as force-controlled manipulations of microscopic objects.

Thanks to the microfluidic channel inside FluidFM probes, soluble molecules can be dispensed through a sub-micrometer aperture at the tip. At the same time, the sensitive force feedback system provides a reliable distinction between gentle contact with cell membranes and their perforation.

Multiple parameters can influence the efficiency of CRISPR gene editing. Amongst them, the precise temporal and spatial control of the localization of the Cas9/gRNA ribonuclear protein (RNP) complex and the repair template is essential.

Generally, delivery of the RNP complexes and HDR template into the nucleus represents a major obstacle in the traditional gene-editing workflow. Current methods deliver material to the cytoplasm first, as it passes through the cell membrane. However, to efficiently edit the genome, the materials must be transported to the nucleus of the cells, affecting the stability of the HDR template and the RNP. FluidFM technology elegantly bypasses the cytoplasmic and nuclear membranes to directly deliver the material to the nucleus through a highly automated nano-injection process. This ensures that the RNP and repair template reach their targets. The specific probe used for the direct delivery of CRISPR-Cas complexes into a cell is the FluidFM nanosyringe. It allows injection into single nuclei without compromising cell viability. The very sharp apex and around 600nm aperture at the front side of the pyramidal tip guarantees gentle perforation and injection of compounds with a wide range of molecular weights and densities.

In more sophisticated projects, researchers aim to edit several loci in the same cell simultaneously. Whether it is only a handful of genes to be targeted, for example, to optimize new antibody production, or several hundreds, as in genome writing, it is a very tedious process to successfully obtain mutations of all the targets in the same cell.

Using a FluidFM nanosyringe, multiple different CRISPR-Cas9 RNP complexes can be delivered simultaneously, allowing the easy and instantaneous introduction of tens to thousands of different gRNA into the same single cell.

It is yet unknown how many RNP complexes are required for a successful integration of the desired change in a cell, whilst minimizing the numbers of off-target mutations, as it is not possible to calculate how many molecules penetrate the cells and reach the nucleus with conventional methods, such as electroporation. With FluidFM technology, the injected volume per cell can be precisely determined at a femtoliter scale, allowing users to precisely link the efficiency and number of off-target mutations to the effective number of RNP complexes delivered to the nucleus.

FluidFM technology has been successfully used in a wide range of applications, including cell adhesion measurement, cell isolation, nano-injection into cells or cell extraction. For the future, Monnier and Cytosurge foresee a major impact of this technology, not only in the field of gene editing, but also in drug development and/or neuroscience.