We reveal the cell counters, LC systems and particle size analyzer that have earned one of these coveted awards based on exceptional reviewer feedback 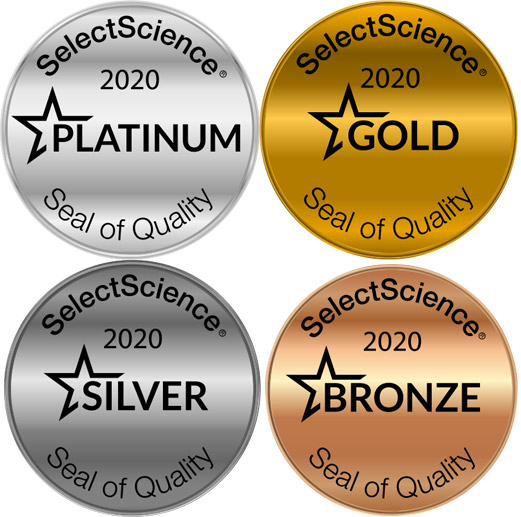 The latest laboratory instruments to earn a prized Seal of Quality have been announced in recognition of outstanding feedback received from scientists globally.

Seals of Quality recognize the top 0.1% of products that consistently receive the highest customer review ratings on SelectScience® and are designed to help scientists and healthcare professionals worldwide see at a glance the instruments and services their peers recommend the most.

Among the latest to receive a Seal of Quality is the LUNA™ Family of Automated Cell Counters by Logos Biosystems, which has now received well over 200 reviews from scientists around the world, with at an outstanding average overall rating of 4.8 out of 5 stars – making them only the sixth product in history to be awarded a Platinum Seal of Quality since the program was launched in 2017.

The LUNA automated cell counters are designed to offer incredible speed, accuracy, and reliability, and users have been impressed. Mike Licudi, from Imperial College London, left this review in August 2020: “I love the LUNA counter. It's so easy to use and it's fast. Love the fact that there are multiple counting modes and you can set it up to use your custom stains.”

Meanwhile, another cell counter is following hot on the LUNA’s heels: The environmentally-friendly CellDrop™ Automated Cell Counter has been awarded a Gold Seal of Quality, with over 100 reviews at an average rating of 4.8 out of 5.

The first imaging cell counter to remove the need for slides or plastic consumables, the CellDrop was only launched last year by DeNovix and has been receiving rave reviews ever since.

One recent 5-star reviewer of the CellDrop is Sarah Silk, from Oxford University, who writes: “Compact for benchtop and easy to use, with no consumables needed. Excellent customer service and guidance whenever required - highly recommend for quick and accurate counts.”

Another new Gold Seal of Quality recipient is the Mastersizer 3000 by Malvern Panalytical, a laser diffraction particle size analyzer designed to deliver rapid, accurate particle size distributions for both wet and dry dispersions with minimum effort.

One of over 100 reviewers who have shared their opinion the Mastersizer 3000, Sunil Kumar Gahlaut, from healthcare company USV, declares it the “best product to verify the particle size.” He writes: "Best product, best service, 21 CFR-compliant software, accurate and precise results.”

New Seals of Quality are announced quarterly — there are currently just over 50 lab products permitted to display a SelectScience Seal of Quality.

SelectScience Editor-in-Chief and Publisher, Kerry Parker, said: “I would like to take this opportunity to thank all our reviewers around the world for sharing their valuable opinions and also to congratulate these new Seal of Quality winners, who have been recognized by the people who matter most, their customers.”