Editorial Article: How I Saved our NMR from Hurricane María Devastation

In this exclusive interview, find out how one dedicated scientist at the University of Puerto Rico kept his lab’s prized Bruker NMR running in the wake of one of the most destructive hurricane seasons on record

We’ve all had to deal with our fair share of challenges in the name of science, but few as tough as those faced by Melvin De Jesus Flores, whose laboratory on the eastern coast of Puerto Rico was battered by the tenth-most destructive hurricane on record just a few months ago.

On September 20, 2017, Hurricane María rampaged through Humacao, leaving a trail of absolute devastation at The University of Puerto Rico in Humacao (UPRH) and flooding Flores’s NMR lab. Five months on, like most of the island, it still suffers from prolonged periods without electricity. 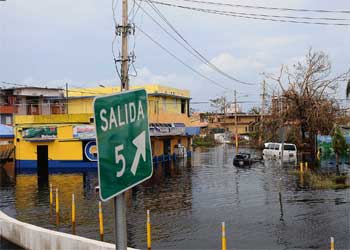 Flooded area in Carolina, Puerto Rico, after the path of Hurricane María across the island. Photo by Sgt. Jose Ahiram Diaz-Ramos

For De Jesus Flores, the lack of power, as well as other problems caused by the terrible storm damage, have presented unique challenges in maintaining his Bruker AVANCE 400 Mhz NMR system.

But, somehow, it hasn’t managed to stop him, as SelectScience discovered when we contacted the instrumentation specialist to find out how he has been coping since disaster struck. With phone lines still temperamental, De Jesus Flores kindly found time to respond by email.

What did you find when you first visited the campus after the storm?

UPRH was the most devastated campus of the entire university system. The damage to the buildings ranged from partial to complete destruction. During my first visit to our campus and NMR facility which is located on the second floor of the science building, I found a flooded laboratory. There was 1 inch of water which had entered through the windows and roof filtration due to the 155 mph sustained winds which occurred during Hurricane María.

Without electricity, how did you manage to replace the NMR’s liquid nitrogen?

Without electricity to run the elevators I was unable to bring my usual large Dewar upstairs for the next liquid nitrogen transfer. Instead I used two smaller 10 liter Dewars, I transferred the LN2 up the stairs to the NMR laboratory, and cautiously poured the cryogenic liquid into the magnet through the biggest funnel and rubber tubing I could find which fit, using a small ladder and taking special care to avoid the formation of an ice block in the nitrogen ports. Every transfer took about 4 to 6 Dewars to complete. I repeated this procedure for 90 days even after power restoration, because the elevators were still not working.

What other challenges did you face? 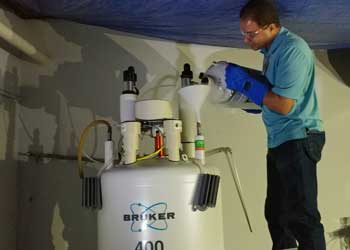 Another great challenge was the liquid helium transfer, which had to be transported in a 100 liter Dewar. I was able to estimate the helium level using my logs, which was calculated to be 50% during the last week of November. Without a working elevator or any ramps up to the second floor I had to consider how we would get the Dewar up to the NMR lab.

Helium stocks were also running short across the island and, with preference being given to hospitals and other companies with cryogenic facilities, I had to compete to receive a 100 liter Dewar. We were very grateful to receive a donation from Bruker BioSpin Co. to purchase cryogenics for both Rio Piedras, Medical Science and Humacao Campus NMR systems.

By the time the liquid helium arrived after several delays at the end of December, the magnet helium level had reached a risky 40%. A digger was used to lift the large helium and nitrogen Dewars to the second floor. For the first time in almost 3 months since the storm I did not need to carry small Dewars up to the ladders for the cryogenics transfer. 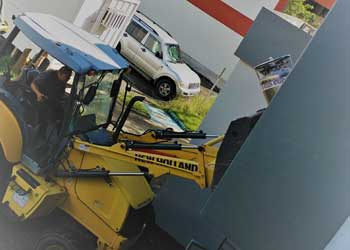 In the next few months, our chemistry department will need the repair of laboratory utilities, including fume hoods motors, air conditioners, air dryers and the acquisition of some scientific instruments damaged by the effects of hurricanes Irma and María.

Currently, due to the defective elevators, a digger is still needed to bring the large Dewars to the second floor and to do the correct transfer to the magnet. However, obtaining these Dewars is still challenging. The local supplier we normally work with cannot produce liquid nitrogen at the plant in Humacao, this has resulted in liquid nitrogen being imported from the USA at great expense. The company has also had to limit allocation of the liquid nitrogen to half that of our normal usage. This is making it difficult to obtain enough cryogenics on time for the next transfer at a safe level.

How do you hope to maintain the NMR moving forward?

Our NMR system is very old and as such it does not qualify for a preventive maintenance contract. We are currently seeking funds from the university, however these are very limited and aimed at structural damage. Our instrument is presenting problems with the variable temperature unit and is waiting for a probe reparation that is on hold due to the low availability of hotel rooms for the visit of a Bruker technician. We require the update of the console to keep our instrument up to date and in perfect working condition. It is for this reason that I have devoted a lot of effort to keep our system alive within the tragedy that we have lived.

Today, our campus still shows some traces of damage, but even while it is recovering, it is almost fully functional. Our students are well motivated and grateful because they were able to finish the academic year 2017-2018. The research projects and academic activities are running with some limitations, mainly related to science lab structure and utilities that were partially fixed and still awaiting the insurance company’s response. Related to my position, I’m keeping the NMR working and in good condition. The new challenge is to keep it working well after Bruker’s notification last year that it was declared old due to the age and the lack of replacement parts. Because of this, contract service is no longer warranted. I'm also collaborating with Dr. Margarita Ortiz as research technician in a project related to material sciences, in collaboration with the UPENN University.

In addition, I am working with my department partners to replace equipment damaged by the hurricane. Much of the equipment was damaged by power failure, fungi and many other causes. We have obtained the replacements through the help of donations from pharmacies near the campus. Some of the instruments we’ve already acquired are: HPLC, a fluorimeter, atomic absorption, UV, water baths, etc.

A lot of work remains to be done, but with the great spirit of recovery that characterizes us, we will be able to rise again, and stronger.