Editorial Article: Harnessing 19F as an agent in bio-NMR of large systems 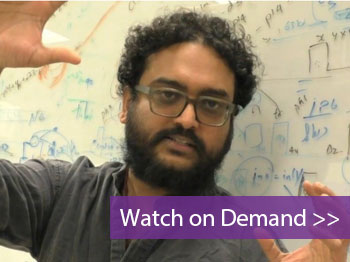 The 19F-13C TROSY principle opens exciting opportunities to probe structure, dynamics and interactions in large biomolecular systems, in which 19F-labels can be incorporated into either a protein or a nucleic acid residue.

The fluorine atom is an extremely sensitive probe towards its chemical environment thanks to high CSA (chemical shift anisotropy); at the same time CSA also badly broadens the NMR-signals of 19F-labels in biomacromolecules. The TROSY effect can be used to combat CSA and narrow the linewidth of the 19F-signals allowing their detection by solution-state high-resolution NMR spectroscopy.

Key topics covered in this webinar are:

Q: There are many good options for the 180° pulse to cover a 19F frequency range, but not for the 90° pulse. Is it possible to make an optimal control pulse that covers 100 kHz, and if yes, does it need very high power?

HA: For the 180° pulses especially, there are options from us and options from people like Burkhard Luy who have made some of these great pulses. For the 90° pulse, there is a set of pulses by Gareth Morris called CHORUS, which can easily excite about 500 kHz in fluorine. The only problem with such a pulse is that if you have a para-fluorine that has trinuclear coupling, then these peaks would be distorted because the pulse is about 4 milliseconds long. These pulses will, however, give you a uniform excitation over a large bandwidth.

We have a paper, which is currently under review, just for this. There, we report a much shorter pulse, about 40 to 50 microseconds, which can give you about 70 to 80 kHz bandwidth with power of about 20 kHz, so it would be close to a hard 90. The advantage here is that the pulse is so short that you do not need to worry about the homonuclear couplings, but you will end up with a first order phase that you need to correct. Other than that, it will be uniform over the entire bandwidth. That paper will be out soon and the pulse will be a part of the Bruker suite.

Q: Could 19F labeling of 15N-labeled proteins also be done?

HA: If your minimal media is grown with 15N and 13C, all your amino acids would be 15N labeled, except for the part where you add glyphosate. Then, your labeling will take the pattern of whatever you add. After the glyphosate, you have your aromatic amino acid synthesis stopped. If you add 15N-labeled tryptophan, your resulting protein will be 15N-labeled tryptophan. Since we start from a precursor amino acid from CIL, from Cambridge Isotopes, that amino acid is labeled 13C at either the 3rd or the 4th position in the ring.

We do not have that version available with 15N labeling. If somebody could make that, then you can have the fluorinated amino acid also 15N labeled. For all the rest of the amino acids, it would mimic that of your media. If you go to a media with 15N and 13C, 15N ammonium chloride and 13C glucose for example, all your other amino acids except for the aromatic amino acids, would take that pattern.

Q: Would it be easier and cheaper to uniformly 13C and 15N label, and add then the 19F labels on top of it?

HA: The carbon labeling for all amino acids follows from the labeling that you do, except for the aromatic amino acids which you add in after you add the glyphosate. If you have a tyrosine, for example, you could have the tyrosine fully carbon labeled, all on the ring except that one position. The disadvantage would be the large C-C coupling band, which is about 60 Hz, but the addition of a fluorine to a carbon shifts the chemical shift of that carbon by at least 20 ppm.

You can use band-selective pulses or you can use this in constant time coding, but in this case, since we're doing a carbon-detected experiment, you have to apply some strange decoupling, which has been incorporated into Bruker pulse programs. So, yes, this is possible, and the opportunity of having all the other carbons gives you the choice of doing other TOCSY-type transfers.

Q: You used some relatively small proteins at low temperature to then make large proteins. I'm wondering how successful you can make fluorine-labeled large proteins, above 100 kDa?

HA: I showed you one spectrum of a proteasome that was large. The reason that we choose these proteins that are small is not because we want to. We don't have access to a fluorine probe at Harvard, we have to go to Bruker, which means that I need to make a sample that will be stable for quite a long time. If there was a 100-kDa protein that is stable for about two or three months, we would be happy to work with that, but that is a limitation because larger proteins often have a tendency to die off quite fast. The second limitation is the availability of the 13C fluorinated amino acids. We've got to get these synthesized. They are not readily available, and sometimes they get lost in the shipment from Bulgaria to here.

These are the two limiting factors. If I could make a protein like MBP or a human carbonic anhydrase that could be stable for a year or two, then I could do multiple experiments. Once we get easy access to the amino acids, we'll be glad to test these on larger samples that have a shorter lifetime.

Learn more about emerging techniques in NMR: Watch this webinar on demand >>