Sengenics CSO and inventor of the KREX™ protein folding technology, Professor Jonathan Blackburn, discusses the applications of KREX™ for the discovery of autoantibody-based companion diagnostics and early disease detection biomarkers, as well as the potential benefits in the treatment of autoimmune disease, cancer, neurological and infectious diseases and beyond 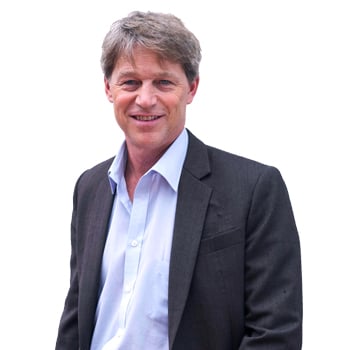 While autoantibodies are often associated with autoimmune diseases, their ability to recognize changes in self-proteins has broad potential in the early diagnosis of many diseases, including cancers, as well as stratification of patients into disease subgroups.

In this interview, we speak with Professor Jonathan Blackburn, CSO of Sengenics and inventor of the KREX™ protein folding technology, to learn how this innovative platform is advancing the discovery of autoantibodies and how, in turn, these biomarkers could transform the diagnosis and treatment of autoimmune disease, cancer, neurological and infectious diseases.

“Normally, we think about antibody production in the context of an infection, and the humoral antibody response to the aberrant presence of a pathogen. But it turns out that the human immune system also recognizes aberrant changes in human proteins. And that’s where the field of autoantibodies comes in,” explains Blackburn. “People normally think about autoantibodies as markers or drivers of classic autoimmune diseases – diseases like Sjögren’s disease, systemic lupus, and rheumatoid arthritis. But actually, autoantibodies turn out to be rather more prevalent in populations and across a more diverse range of diseases than we thought before.”

It is this ability to detect altered self-proteins with very high affinity and specificity that makes autoantibodies excellent biomarkers for identifying disease states, as well as stratifying patients into different subtypes – for example, to predict if patients are likely to respond to treatment.

Traditional biomarkers, such as proteins or those used in genomic approaches, provide a snapshot in time that may not correlate directly with the disease.  However, autoantibodies manifest and persist throughout the course of disease giving valuable insight into the real-time health status of the patient.

By looking at autoantibodies, it may also be possible to perform pre-symptomatic diagnosis of disease. “For a true disease-associated autoantibody, we're typically measuring picomolar affinity binding to the target antigen, making autoantibodies very easy to detect in liquid biopsies,” says Blackburn. “Not only are they good at marking out disease, but autoantibodies also appear early in disease, often years before physical symptoms appear.”

While not all self-proteins will be autoantigens, Blackburn notes that more than 1,000 autoantibodies have been described so far and predicts there are thousands more to be discovered.

A spinout from Cambridge University

Blackburn, who is also a professor of proteomics at the University of Cape Town, developed the KREX™ technology in the early 2000s while working as faculty at University of Cambridge. The group soon realized the potential of this protein-folding microarray technology. “We quickly worked out that the technology that we had developed allowed us to look at protein-drug interactions, protein-protein interactions and protein-antibody interactions in a high-throughput manner,” says Blackburn.

It is this core technology developed by Blackburn’s group that underpins the business today. Sengenics acquired the worldwide rights to the technology in 2015, enabling its commercial use within the scientific industry for biomarker discovery and characterization.

The KREX™ technology enables the high-throughput expression of hundreds or even thousands of different proteins in a manner where the folding and functionality of the protein is controlled throughout expression, purification and immobilization into miniaturized assay formats.

The established technology, which has already been cited in many publications by Blackburn’s academic group, as well as Sengenics collaborators and customers, uses a biotin carboxyl carrier protein (BCCP) tag as a marker to identify correctly folded, and therefore functional, proteins. The BCCP tag, which fuses to the protein of interest, only becomes biotinylated in vivo if the tag itself is correctly folded, which in turn, only occurs if the protein it is fused to is correctly folded. The use of this tag also removes the need for large-scale protein expression or purification. Picogram quantities of crude lysate can be printed on streptavidin-coated surfaces where biotinylated folded functional proteins stick to the surface while misfolded proteins are washed away.

“It provides us with an extraordinarily simple and rapid way to, in a single step, immobilize and purify folded functional proteins into highly multiplexed miniaturized assay formats,” says Blackburn.

“Antibodies typically recognize a discontinuous, 3-dimensional shape and charge on a protein surface, rather than a specific linear peptide sequence,” explains Blackburn. “If you can't control folding of proteins on surfaces during expression or in the assay format, then what you will have left on the surface are linear epitopes that are not necessarily what the antibodies recognize in biology. In particular, you'll lose all the discontinuous epitopes that provide the physiological selectivity and the specificity of antibody recognition.” 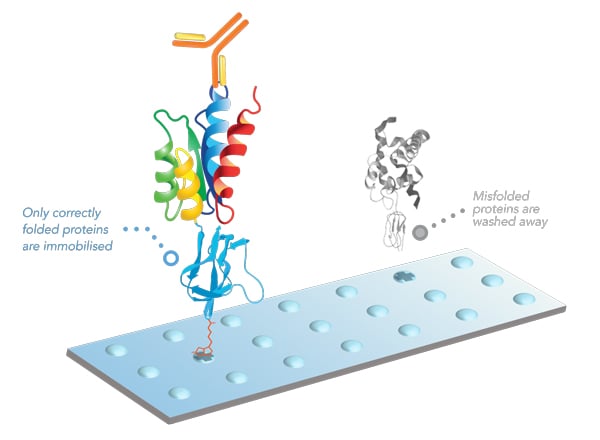 Advancing diagnosis and stratification of a range of disease areas

Working with academic and industry partners, Sengenics’ protein microarrays have been applied in autoantibody biomarker discovery and patient stratification for a number of disease areas. Blackburn shares: “We're seeing that autoantibodies not only provide a means to early diagnosis, and differentiation of different underlying diseases, but also within a disease to stratify patients according to underlying etiologies.”

In the autoimmune disease space, autoantibody profiles have been shown to discriminate between classic autoimmune diseases. For example, using Sengenics technology, Sjögren's disease can be differentiated from diseases with overlapping clinical symptoms. It can also be differentiated from lupus and rheumatoid arthritis, which have similar biomarkers. While in the field of cancer, autoantibody profiles have enabled the identification and differentiation of stage one and stage two melanoma patients from healthy controls with a sensitivity and specificity of over 80%.

This ability to stratify patients into subgroups plays an important role in ensuring patients receive the right treatment, with pharmaceutical companies interested in the development of companion diagnostics. Blackburn notes: “We see increasingly that the data we're generating now enables us not only to tell our partners that there are subgroups of disease patients, for example, subgroups of rheumatoid arthritis patients, but that some of those subgroups are more likely to respond to treatment than others.”

In addition to autoantibody biomarker discovery, applications of the technology have also expanded to infectious diseases. In the virology field, Sengenics’ technology has been used, for example, to identify patterns of antibody binding to arrays that differentiate between diseases with similar clinical symptoms, such as dengue and Zika virus infections. Meanwhile, work on SARS-CoV-2 not only looks at the response to viral proteins, but also at how acute viral infections modulate the human immune response to self-proteins. Recent studies using Sengenics technology have characterized antibody response as a function of time as well as establishing how antibody profiles are affected by natural variation in the target protein and the impact this has on vaccine efficacy.

Learn more about Sengenics and view products on SelectScience

Looking ahead, Blackburn sees many opportunities for autoantibodies to change the way disease is diagnosed and treated. “I think it is extremely exciting. The world is crying out for better biomarkers, and we think that autoantibodies have many of the characteristics required,” says Blackburn — something that Sengenics’ numerous academic, pharmaceutical and biotech partners worldwide surely agree with.

Sengenics is continuing to develop its systems serology technological capability. One approach, incorporated in the company’s latest products, is to provide deeper information about the serological response in individual patients. “We can now tell not only what the antigenic targets for antibodies are, but also what the class, subclass and functionality of the antigen-specific antibody response is,” says Blackburn.

In the longer term, Blackburn sees the technology being used beyond antibody binding. For example, in the development of mass spectrometry readable microarrays for protein-drug interactions and protein-protein interactions at high-throughput, as well as in its ability to create miniaturized, high-throughput assays on protein complexes. “We've now built and demonstrated the technological capability to express proteins in complexes and put those complexes into the miniaturized assay format,” Blackburn concludes. “So, there's a huge amount of work going on, both in terms of broadening out our capability in the antibody field, but also looking beyond antibodies now into enabling functional proteomics in the broader biomedical field.”