Since the turn of the 21st century, the development of next-generation sequencing (NGS) has made whole genome sequencing a reality. However, the technology has been based on short genomic reads, limiting current techniques to what can be described as ‘almost whole genome’ sequence data. Now, one company — Sage Science, Inc. — is on a mission to develop novel techniques that truly sequence the whole genome. SelectScience® speaks to the company’s chief scientific officer, Chris Boles, to discover more about its revolutionary development of SageHLS.

SS: What problems face companies that are developing long-read technology?

CB: While several long-read genomic technologies have been developed, a major problem in their implementation is that existing popular DNA extraction technologies do not produce high-molecular-weight (HMW) DNA samples greater than about 50kb in length. There are several reasons for this: one major factor is that genomic DNA is very long and is easily broken by mixing and pipetting operations that are used during traditional extraction techniques. In addition, many DNA purification schemes involve adsorption and release from microparticle supports, and manipulation of bead-bound HMW DNA can also produce shearing. 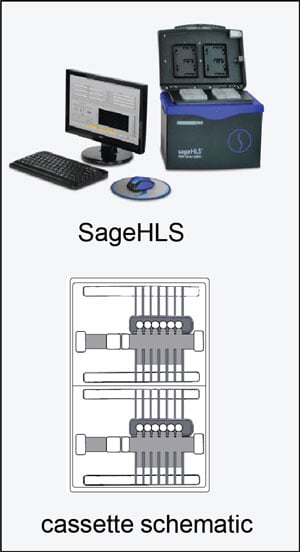 SS: What is the SageHLS, and how was it developed?

CB: At Sage we have developed a new system, SageHLS, for extracting extremely HMW DNA without subjecting it to any viscous shear. In 1984, Schwartz and Cantor originally achieved this by casting cells into small agarose disks and performing lysis and protease digestion of the cells while they were encased in agarose. We wanted to achieve the same end, but without the mess (and art) of using molten agarose.

Our HLS agarose cassettes have two input wells at the top of the separation channel, a small well for the input sample, and a larger one for an SDS-based lysis reagent. In contrast to our other products, the input sample for the HLS cassette is a suspension of intact cells or intact nuclei. After loading the cassette with cells and lysis solution, an extraction electrophoresis stage is performed so that the negatively charged SDS moves rapidly through the sample well. As the SDS passes through the sample well, it lyses the cells and strips away proteins and membranes, which are carried down the agarose separation channel to the positive electrode reservoir. The purified DNA, greater than 2000kb in size, is moved into the agarose wall of the sample well, and because of its tremendous size, it becomes immobilized there, unable to move further into the separation channel. After the extraction electrophoresis stage, the sample well can be emptied without any loss of the genomic DNA. The sample well can be refilled with enzyme reaction mixtures for modifying or cleaving the immobilized DNA. This works well because most proteins are very small compared to DNA and readily diffuse into the agarose sample well wall, where they react with the DNA.

We have also performed sequential reactions on HLS-purified DNA, by emptying and refilling the sample well several times with different enzyme mixtures. During the enzyme modification stages, some DNA fragmentation step must be included in the workflow, to reduce the size of the processed DNA so that it will become electrophoretically mobile. In our current cassettes, the threshold size where DNA becomes electrophoretically mobile is about 2000kb.

SS: The SageHLS utilizes CRISPR/Cas9 technology, why is this important?

CB: We have launched the SageHLS system with protocols for two initial applications. These differ largely in the enzymes we use for the modification stage. In the first application, the goal is to isolate extremely HMW genomic DNA, ranging in size from 100kb up to 2000kb.

In the second application, CATCH (short for Cas9-assisted targeting of chromosomal segments), we digest the immobilized genomic DNA with custom Cas9 complexes that are designed to cut out specific genomic region for targeted analysis. After digestion, we perform size-separation electrophoresis and electroelution as before, but in the CATCH process, only the Cas9-cleaved DNA will become mobile.

SS: Why do you think people are interested in SageHLS?

The CATCH process is of interest to researchers trying to develop targeted long-fragment sequencing methods. At present, long-range PCR is the only viable approach to targeted long fragment sequencing, but long-range PCR is difficult to use for targets longer than 10-15kb. In contrast, CATCH in the HLS platform is only limited by the upper electrophoretic mobility limit of our gel system, which is 2000kb.

The first public presentations and publications using the SageHLS will be coming out early this year. They will explore the use of SageHLS for CATCH in front of long-read targeted genomic sequencing.