Cell counting is an integral procedure in cell biology for both basic and translational applications. The conventional method to count viable cells uses a glass hemocytometer loaded with trypan blue-labeled cells, examined under a microscope, followed by manually counting the cells. In recent times, automated cell counters have emerged. However, requiring the use of plastic consumables, these not only increase the costs of operation but also have a negative impact on the environment.

Recently, DeNovix introduced the first-ever imaging cell counter that removes the need for slides, thereby minimizing the environmental footprint of each laboratory. In this article, we speak with Andrew Jones, Market Development Manager at DeNovix, about this new environmentally conscious automated cell counter that can help reduce plastic waste in labs while providing accurate, reliable cell counts.

Speaking of his role, Jones says: “One key aspect is working as a bridge between the scientific community and our product development teams.” To design and create products that are highly valued in the lab, the DeNovix team works closely with researchers to better understand their workflows, frustrations and desired features for improved productivity.

Manual cell counters, conventional equipment in many labs, typically have a low initial purchase price. The cell count readouts are, however, highly subjective to human interpretation, increasing errors between different users or experiments. Variabilities in sample volume or improper coverslip positions can lead to more errors. Moreover, in projects with a large sample size, manually loading, counting and recording data can get tedious and time-consuming.

Automated cell counters, on the other hand, completely eliminate human subjectivity, making cell counts more reliable. Higher throughput projects can be completed in less time. The use of disposable plastic slides, however, can cause a significant increase in operating costs, while generating environmentally unsafe waste with each experiment.

To simultaneously address the accuracy issues posed by manual counting and the environmental and cost-related issues caused by automated cell counters, DeNovix has developed the latest DirectPipetting™ cell counting technology. 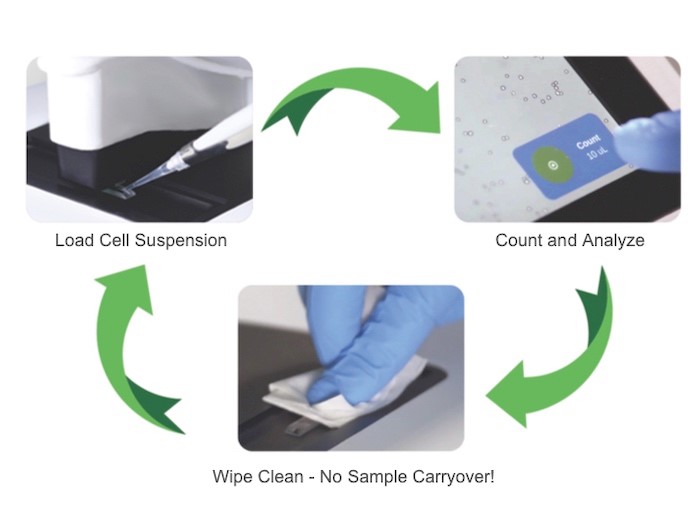 The new CellDrop cell counter by DeNovix is equipped with the DirectPipette™ technology. Cell suspensions are loaded directly onto the platform, analyzed, and simply wiped away with a dry laboratory wipe, thereby eliminating the use of glass or plastic slides.

During the product development phase, the DeNovix team spoke with cell biology labs about current cell counting applications and what they perceived as bottlenecks in the workflow. Upon voicing their frustration at the current options for counting cells, two distinct points of view appeared.

“Labs that had automated systems in place complained of the cost of purchasing disposable plastic slides and the environmental impact of generating large volumes of single-use plastic waste,” says Jones. Conversations with researchers revealed that they were environmentally conscious and routinely cutting down their personal usage of plastic consumables. The scientific community also hoped that manufacturers would craft innovative ways to minimize the environmental footprint of their research.

On the other end of the spectrum were labs that relied on manual counters. “Where labs were counting manually, the requirement for costly disposable slides were often cited as a barrier to purchasing automated systems,” says Jones.

Taking these pain points into account, the DeNovix team developed the DirectPipette technology that allows users to Count Cells Without Slides™. The CellDrop Automated Cell Counter by DeNovix eliminates the use of plastic slides, replacing them with two permanent optical sapphire surfaces positioned parallel to one another to form a chamber analogous to a hemocytometer. The upper surface is mounted on a moveable arm allowing variable height sample chambers.

In a calibration-free approach, the cell suspension is pipetted into the chamber, analyzed and then simply wiped away. “The key advantage here is that once the sample has been counted, it can be cleaned in seconds with a dry lab wipe,” adds Jones. “Users are often initially skeptical about how well this can clean but the advantage of being able to live preview the image of the measurement surface is that you can easily verify the cleaning is sufficient.”

The need for fluorescence-capable cell counters

In samples with cellular debris and non-nucleated cells, using trypan blue cell counts can skew the numbers. “Primary cell samples from tissues or blood contain debris such as plasmid, red blood cells, etc., that form a part of the background,” notes Jones. “These are difficult to distinguish from the cells of interest using conventional methods. To do so takes expertise and is ultimately a subjective method prone to high user-to-user variability.”

Fluorescence assays using inexpensive dyes can provide accurate counts and viability assessment of nucleated cells. “Fluorescence is becoming the method of choice for these applications,” Jones continues. With dual fluorescence and brightfield capabilities, the CellDrop expands the experimental possibilities in the lab. “The low cost of assays such as acridine orange and propidium iodide (AO/PI) means that once the fluorescence-capable cell counter is installed, most users can move from brightfield to fluorescence for all their samples.”

The current generation of scientists are driven towards reducing the environmental impact caused by single-use consumables and plasticware as a result of their research activity. The innovative CellDrop cell counter by DeNovix is currently rated five stars by scientists worldwide, carries the prestigious Bronze Seal of Quality, and was voted Best New Life Science Product of the Year for 2019 at this year's Scientists’ Choice Awards.

Speaking about future projects at DeNovix, Jones says, “We continue to expand the number and types of applications that are possible on CellDrop, allowing the environmental and performance benefits to be implemented in new areas such as brewing, environmental and food monitoring and plant biology.” Sustainability and better user experience can both find a place in life sciences technology. Jones adds: “In addition to providing environmental and cost benefits, DeNovix instruments should always be best-in-class in performance and focus on simplifying key steps in the lab workflow.”

Do you use DeNovix products in your lab? Write a review today for your chance to win a $400 Amazon gift card>>