Prof. Dr. Ger Rijkers tells SelectScience how he is using Luminex xMAP Technology® to develop a multiplex assay that can identify specific antibodies to multiple serotypes of S. pneumoniae in a single test

Streptococcus pneumoniae is the bacterium responsible for the majority of community-acquired pneumonia cases and can cause major, life-threatening disease in both the very young and very old. One of the major challenges in the treatment and prevention of S. pneumoniae is that there are 93 different serotypes of the bacterium.

SelectScience® speaks to Professor Ger Rijkers, Head of the Department of Science at University College Roosevelt, in Middelburg, the Netherlands, to find out how he is developing a custom multiplex assay to efficiently identify the antibodies against specific serotypes of S. pneumoniae responsible for infection.

Rijkers’ background is in medical immunology, working in a clinical setting. The aim of his current research is to create an immunoassay that can be used in hospitals around the world to identify antibodies against all 93 serotypes of S. pneumoniae. Such an assay would aid effective patient treatment, inform vaccine development, and improve understanding of the disease. 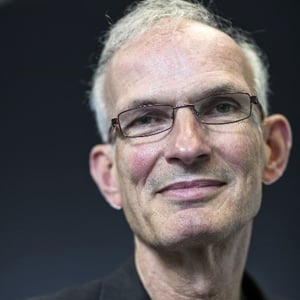 Professor in Biomedical and Life Sciences, cell biologist and medical immunologist Rijkers is Head of the Department of Science at University College Roosevelt, the Netherlands, and has published over 325 papers in peer-reviewed scientific journals. In 2016, he published the 2nd edition of his textbook Immunologie

SS: Why do the many serotypes of S. pneumoniae present a challenge to medical immunologists?

GR: Streptococcus pneumoniae comes in 93 different serotypes, that is, there are 93 different polysaccharides capsules. This is a challenge for the immune system to defend against, as antibodies against an infection with one serotype will not protect against a second infection with a different serotype. This also presents a challenge for vaccine development, and vaccine manufacturers formulate a vaccine that covers the most common serotypes.

In the early days, before there was any multiplex immunoassay, the way to determine the serotype was by enzyme-linked immunosorbent assay (ELISA). Ideally, you would have to do 93 different ELISAs in order to detect all serotypes, which of course is not logistically possible.

In my lab, we tested for eight of the most common serotypes in addition to IgA, IgG1 and IgG2 antibodies. This meant every blood sample had to be tested on 24 ELISA plates, which was extremely time-consuming and also requires a lot of material; I could only manage one 24 ELISA plate assay a day on my own and then I had tested just eight patients.

When Luminex multiplex technology was launched, I immediately realized that if we could use it to detect those eight serotypes, it would provide massive benefits to our laboratory. 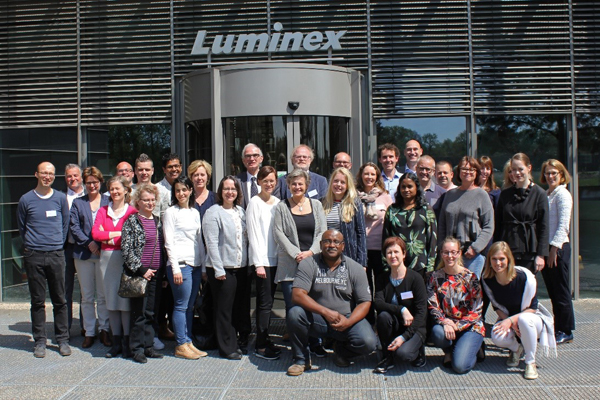 The Pneumococcal Consortium members during the 5th network meeting, which took place at the European headquarters of Luminex, in 's-Hertogenbosch, the Netherlands. The next meeting will be held in Manchester, UK, in 2018   Image courtesy of Professor Rijkers

SS: Why is the measurement of serotype-specific antibodies important?

GR: There are some assays on the market which are non-specific and measure a mixture of all the polysaccharides. However, this gives you limited information about the infection. The latest S. pneumoniae vaccine is made up of 13 serotypes. Discriminating between the serotype-specific antibodies enables you to identify whether the infection is due to a vaccine failure, or a non-vaccine serotype.

SS: Please tell us about your role in the Pneumococcal Consortium and the part xMAP® Technology has played?

GR: We started the consortium because laboratories all over the world were struggling with the same problem of identifying the different S. pneumoniae serotypes, as there is no ready-to-use diagnostic kit available. The xMAP Technology® from Luminex consists of 500 different color-coded beads onto which you can couple a protein – such as an antibody – or in the case of S. pneumoniae, one of the 93 capsule polysaccharides. However, the protocol to couple a polysaccharide is more challenging.

We started the consortium with colleagues from various countries in Europe to see whether we could harmonize the protocol, agree on common standards to use and then obtain similar results when we tested using the same standards. We are going to publish a harmonized protocol, so that other laboratories around the world can benefit from this technology.

Our panel currently contains 25 serotypes, but our aim is to create an all-inclusive 93 serotype panel.

SS: What limits the number of serotypes you can detect at one time?

GR: Theoretically, the only limiting factor to the multiplex system would be the number of different color-coded beads available, but in reality, there are other hurdles. You can get unexpected cross-reactions, where one antibody can react with multiple polysaccharides or vice versa. When this happens, it is difficult to solve; you might have to go back to the drawing board and select completely different antibodies.

So, the higher the complexity of your multiplex system, the higher the risk that you’ll run into a problem with specificity. We remain optimistic and hope that we’ll end up with the full 93 serotypes, but I would be satisfied if we get 80 to 85. 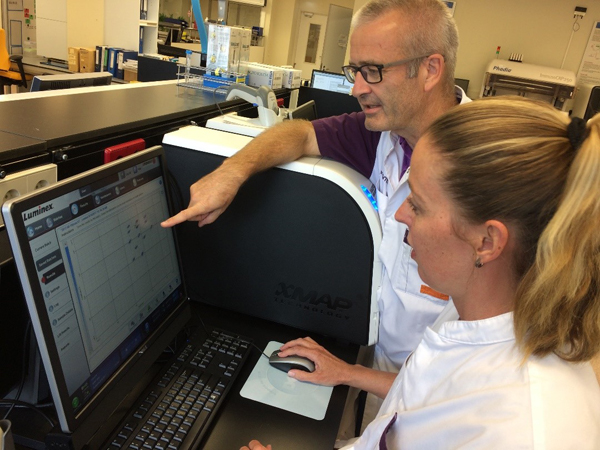 SS: What are the benefits of using the xMAP Technology?

GR: The big advantage is that you can detect a large number of antibodies without the requirement for high sample volumes. This is extremely important when you work with blood samples from young children, because there is only a limited volume of blood available for diagnostics. Additionally, the ability to multiplex greatly reduces the workload, both in terms of the assay set-up and analysis: it doesn’t take any more time to run and analyze a multiplex assay than a single assay.

However, the downside is that although the technique is not very expensive, when you’re using say 25 assays in multiplex for one patient diagnosis, it becomes more expensive. Therefore, you have to question whether you really need all that data.

SS: How do you work with Luminex to meet your research goals?

GR: I have a longstanding relationship with Luminex. We were one of the first groups in the Netherlands, or maybe even in Europe, to adapt the Luminex technology to the technique. We published one of our first papers describing this application of the Luminex technology in 2003 and then a few years later we published another paper which detailed an improved technique (de Jager et al. 2003; de Jager et al. 2005).

When Luminex stopped making their own pneumococcal assay kit, they were supportive in helping us reintroduce our ‘homemade’ assays. Additionally, Luminex Europe was also so kind as to facilitate the Pneumococcal Consortium’s latest network meeting in their headquarters in s-Hertogenbosch, the Netherlands.

SS: How will your pneumococcal research progress in the future?

GR: In the future, I will remain researching pneumococcal immunity and infections all over the world. Currently, the best vaccine only covers 13 serotypes, so there are 80 that are not included in the vaccine. This vaccine is great for the US and Europe, where these 13 serotypes are the most common, but not for Asia and Africa where different serotypes dominate. To design a vaccine which is effective in these areas, we must continue to investigate which serotypes are causing the majority of infections in these regions.

My main research aim continues to be the development of an assay which will measure antibodies against all 93 serotypes.

I envisage numerous other applications of this multiplex technology in clinical diagnostics. For example, it could be used as a diagnostic tool for coeliac disease as it could enable you to discriminate between IgA and IgG antibodies against tissue transglutaminase – an important factor in diagnosis.