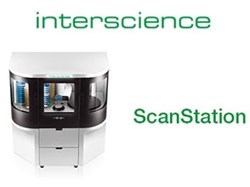 100, 200 or 300 Petri dishes are counted every 30 minutes throughout the process. Colonies are detected & counted as soon as they appear.

The ScanStation is a real-time incubator and colony counting station designed for the pharmaceutical, the agro-food, the cosmetic industries and research. It is the world’s first product centralizing incubation, detection and colony counting of 100, 200 or 300 Petri dishes simultaneously.

In classical Pasteurian microbiology, the Petri dish must be placed in an incubator for 24h and up to 5 days. Then a time-consuming reading operation is performed to count colonies. The operator may notice the presence of invasive or confluent colonies mixed with air bubbles, debris, writings, etc. increasing the margin of error on the final result. The ScanStation provides results as soon as the 6 hours after the beginning of the incubation, which is up to 3 times sooner, faster and with unequalled accuracy.

It is to perform incubation and colony counting at the same time, which allows:

"The ScanStation is a revolution for microbiological analyses: it detects and counts colonies as soon as they appear at the beginning of the incubation. It is a real-time revolution providing anticipated results for control quality labs in the pharmaceutical, agro-food, cosmetic industries and research. The anticipated results saves time and allows earlier release of production batches. With this new technology, microbiologists can actually see, in real-time, the video of bacterial growth on the Petri dishes. This innovation is a mix between classic methods with the Petri dish and the latest innovations in robotic and computing, providing analyses’ results with unequalled accuracy and much sooner," says Emmanuel Jalenques – Head of R&D and Co-CEO of INTERSCIENCE.

The major innovation of the ScanStation is the automatic counting of the colonies at an early stage of their development, starting at the beginning of the incubation cycle. Up to 100, 200 or 300 Petri dishes are counted every 30 minutes throughout the process, delivering a video recording of the bacterial growth. Final results are known 3 times sooner and faster because up to 100 Petri dishes are processed simultaneously and with unequalled accuracy as colonies are detected before clustering or covering can occur.

Want more science news straight to your inbox? Become a member of SelectScience for free today>>