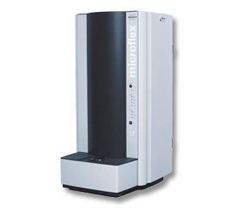 Bruker Daltonics, Inc. is pleased to announce that its second clinical trial for the MALDI Biotyper in the United States is now well under way with an expanded group of clinical trial sites.

Since its European launch in 2007, the MALDI Biotyper has revolutionized microbiology testing by providing identification results in minutes versus hours or days for phenotypic methods. The high-throughput MALDI Biotyper CA System can identify 192 isolates in about an hour with a decentralized workflow common to microbiology laboratories, and it can do so at reasonable cost, thus improving productivity. In published studies, considerable cost reductions of 56 – 89% have been demonstrated through reduction in phenotypic kit usage. Over 1,100 microbiology laboratories worldwide have selected Bruker as their supplier of MALDI-TOF systems for microbiology testing with over 200 systems sold in the Americas to date.

Previously, Bruker Daltonics had received 510(k) clearance for the MALDI Biotyper CA System from the US FDA in November 2013. This clearance included Bruker’s global market leading MALDI Biotyper instrumentation, IVD reagents, software, standard operating procedures, and an initial library of over 100 species of aerobic gram negative bacteria contained within 40 species or complexes. Results generated by the MALDI Biotyper CA System were compared to 16s molecular sequencing and showed 99.78% of the isolates tested produced correct identifications to the genus or species level with only 0.09% of isolates unable to be identified. This level of accuracy is the highest seen to date for any MALDI-TOF-based bacterial identification system. In comparisons done to date, this gram negative library represents over 98% of a typical clinical laboratories aerobic gram negative workflow.

Data from this second clinical trial are expected to be used in further regulatory submissions in mid-2014, highlighting the company's commitment to make additional high-quality results available to patients and customers in the USA. This second clinical trial is intended to expand our current US clinical microbiology offer with additional rare gram negative bacteria, as well as with aerobic gram positive bacteria, yeasts, and anaerobic microorganisms cultured from human specimens.

Mr. George Goedesky, Bruker Daltonics US Vice President for Microbiology, stated: “Over 180 additional species are being included in this US clinical trial and we are pleased with the progress made to date. Over 330 peer-reviewed publications using the Bruker MALDI Biotyper have demonstrated the operational cost effectiveness, accuracy, and reductions in time to result (TTR). These advantages offer clinical microbiology laboratories a useful tool to meet today’s challenges while assisting the clinician with better, more accurate and timely information.”