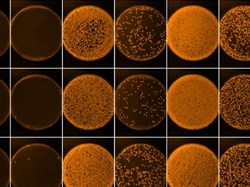 The rise of antibiotic resistance in many pathogens has been driven by the spread of a small number of strains, suggesting that some bacteria may be genetically pre-disposed to evolving resistance. Researchers at Oxford University have tested this hypothesis by quantifying differences in evolvability between pathogen strains and by searching for ‘potentiator’ genes that accelerate the evolution of resistance. Their results are published today in Nature Communications.

Scientists from the Department of Zoology, Oxford University, show that a single gene that codes for an efflux pump predisposes some strains of pathogenic S.aureus to evolve high levels of ciprofloxacin resistance. Bacterial efflux pumps actively pump out chemicals from bacterial cells – sort of like a bacterial bucket brigade – and this an important way that bacteria cope with exposure to a range of toxic chemicals, including antibiotics.

Their experiments involved a common human pathogen, Staphylococcus aureus, that is an important source of antibiotic resistant infections in health care settings (ie MRSA). They used a broad-spectrum antibiotic called ciprofloxacin that was developed in the 1980s, and initially heralded as a solution to MRSA infections.

Lead author, Professor Craig Maclean, said: ‘Antibiotic efflux increases evolvability by magnifying the benefits of mutations that alter the cellular target of ciprofloxacin. Crucially, understanding this link makes it possible to predict which strains are likely to evolve resistance, and to use efflux pump inhibitors to slow down resistance evolution’.

‘Whole genome sequencing has revolutionized clinical microbiology, and our study suggests that it might possible to use genomic data to predict which strains of Staphylococcus aureus have a high likelihood of becoming resistant to antibiotics during treatment. Our study also shows that using antibiotic adjuvants (in this case, an efflux pump inhibitor) can dramatically slow down the rate at which resistance evolves. A number of efflux pump inhibitors are already available, and our work shows a novel strategy for using these compounds as ‘anti-evolution’ drugs.’

In this study published today, the scientists challenged more than 200 isolates of Staphylococcus aureus with evolving resistance to the antibiotic ciprofloxacin in the lab. These experiments showed that different strains evolve resistance at very different rates. They then used genome resequencing and gene expression profiling to identify key candidate genes that are associated with high evolvability across S.aureus isolates.

Experiments with genetically engineered strains of S.aureus then made it possible to confirm the importance of a key candidate gene, norA, that pumps antibiotics out of bacterial cells.
The scientists were then able to demonstrate that chemically inhibiting the norA efflux pump can actually prevent S.aureus from evolving resistance in the lab.

Professor Craig Maclean, said: ‘The key breakthrough moment in this project came when we found that a single gene, norA, could play such a big role in evolvability, in spite of the fact that S.aureus genomes contain more than 2,000 genes, many of which vary between isolates. Although all of our results supported the idea that norA underpins evolvability, it was nonetheless surprising to see how effectively norA inhibitors could prevent resistance from evolving in the lab.’

The scientists hope that these results will inspire clinical researchers to test the role of efflux pumps in resistance evolution during infections. They are following up on these results by trying to understand the genes that enable bacteria to evolve resistance to antimicrobial peptides that are used as a ‘last line of defense’ against antibiotic resistant pathogens.

The authors note two limitations with this study: 1) the specific drug that they used (reserpine) is not yet FDA approved, and so could not be used in humans and (2) it is possible that anti-evolution drugs may be less effective in vivo because of difficulties in getting both antibiotics and anti-evolution drugs to the same tissues at the same time.

Antibiotic resistance in pathogenic bacteria is a serious problem. Resistant infections are currently estimated to cause close to 1 million deaths per year, and it has been predicted that this will increase to 10 million deaths per year by 2050. We need new antibiotics to counter this threat, but we also need new tools to predict when resistance is likely to evolve in response to antibiotic treatment.