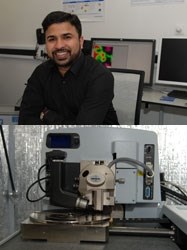 Research on a ground-breaking new technique for drug analysis has earned University of Huddersfield scientist Dr Muhammad Usman Ghori (pictured right) the top award at an international conference. Dr Ghori has been working on the use of an ultra-high resolution atomic force microscope (AFM) in order to carry out nano-scale chemical imaging of material surfaces.  The technique – which has been patented – achieves greater accuracy and analytical power than existing methods of chemical mapping.

“Understanding the surface topography of materials is vital especially in the design, development and optimization of pharmaceutical products”, said Dr Ghori.

In 2015, Dr Ghori was declared Vice-Chancellor’s Research Student of the Year at the University of Huddersfield.  It was in recognition of his recently-completed doctoral thesis plus a sequence of articles covering issues that include oral-controlled drug delivery systems and various aspects of drug release behavior.

After completing his PhD at the University of Huddersfield, Dr Ghori was appointed as a Research Fellow on a project to develop 3D nano-scale chemical imaging using AFM, working with Professor Mike Reading, a renowned scientist in thermal analysis and Professor Conway, who is an expert on pharmaceutical formulations.

When Dr Ghori attended the Atomic Force Microscope conference and User Meeting, held at University of Cambridge from 13-14 December 2016, he displayed a poster and presented a paper describing the nano-scale imaging technique he has assisted to develop.  The conference had 200 participants from around the world and all were invited to vote for the best poster presentation.

Dr Ghori came top of the poll and received a Platinum Award from conference organizers, Bruker Nano-surfaces UK.  Researchers at the universities of Cambridge and Oxford took second and third places.

Recently, a company named N-Cyte Ltd has been formed to commercialize this new technique, which is based at the University’s 3M Buckley Innovation Centre.

“Using this technology, we were able to construct a 3D chemical map of the distribution of a drug in a tablet at a nanometer size range.  We were delighted that the significance of this technique has been recognised in this way” said Professor Conway.