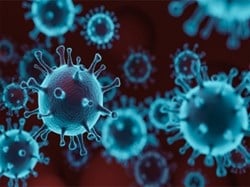 A team of experts, which includes the University of Liverpool’s Dr Richard Urbanowicz, found that neutralising antibodies generated by a single dose of the Pfizer vaccine were less effective at neutralising key variants of concern, for example the beta (first identified in South Africa) variant.

However, the second dose, especially in those volunteers who had previously been infected with SARS-CoV-2, dramatically increased virus variant neutralising antibody responses (and therefore potential protection) to a level comparable to those seen for the original strain of SARS-CoV-2.

This suggests that an additional boost, even using vaccines containing the original strain of coronavirus, will increase protection against variants of concern.

The findings, which are published today in Science Translational Medicine, were part of a wider study – PANTHER – looking at healthcare workers over a long period of time and their exposure to Covid-19, and the impact of that past infection and vaccination on their immunity.

The study was funded by a Covid-19 rapid response grant from UKRI and, with the support of the NIHR Nottingham Biomedical Research Centre, made it possible to follow a cohort of healthcare workers from Nottingham University Hospitals Trust since the beginning of the pandemic.

The team identified a smaller group of healthcare workers (within the PANTHER cohort) who were vaccinated with the Pfizer jab. Around half of them were pre-exposed naturally to the virus, and half were not. The team then compared the antibody response in these people.

Professor Jonathan Ball from the School of Life Sciences at the University of Nottingham and one of the lead investigators on the study, said: “We showed that the individuals with past infection produced more antibodies following each dose of vaccine than those who hadn’t been exposed. We also showed that this increased antibody response was more effective against some of the variants of concern, such as the Beta and Gamma variants.

“In essence, natural infection has mimicked the effects of an additional vaccine dose, and our data clearly shows that this additional antigenic exposure produces an extra boost to the overall virus-killing antibody response that is more effective against variants of concern. Our results support the UK Government’s plan to provide a booster jab in the autumn as an effective strategy in protecting people against these variants.”

Ben Ollivere, Professor of Orthopaedic Trauma from the School of Medicine at the University of Nottingham, who established the study of healthcare workers, and senior author explained: “Having access to information on infection for over a year before the second dose of the vaccine has made it possible to identify the effects of previous SARS-CoV-2 infection compared to the effects of the vaccine on antibody responses.”

Professor Ana Valdes, one of the lead investigators on the PANTHER cohort, and one of the senior authors, said: “Our data shows that immunity generated from SARS-CoV-2 infection likely results in lower levels of protection to variants of concern, but vaccination greatly increases levels of variant neutralising antibodies. Similarly, individuals who have not had SARS-CoV-2 infection should complete their course of prime and booster vaccination doses. Our data also suggest that excellent protection is afforded in this way to major variants of concern.”

Dr Richard Urbanowicz, currently at the University of Liverpool, and one of the lead authors, explains how the team utilised a safe, but effective method for testing virus killing potential of the antibodies present in the blood of the healthcare workers.

He said: “We used a modified mouse virus, that emits light once it gets inside a cell, and covered its surface with the SARS-CoV-2 spike protein. This system, called pseudotyping, enables us to ‘swap out’ the spike protein of different variants, which allows us to test the antibodies from the healthcare workers against several variants of concern.”

Pseudotypes have been used for a variety of different viruses in the lab and is a great tool to investigate how the virus gains entry to the cell.

For more of the latest science news, straight to your inbox, become a member of SelectScience for free today>