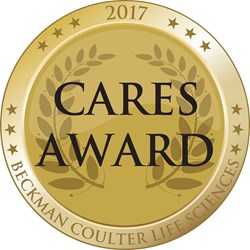 Beckman Coulter Life Sciences is launching an international HIV/AIDS award at the 2016 conference for the African Society for Laboratory Medicine (ASLM) being held in Cape Town, South Africa (December 3 to 8).

The annual award will be part of the company’s global CARES Initiative dedicated to helping people who are living with HIV/AIDS. Beckman Coulter’s CARES award is designed to recognize individuals who have shown ‘care, dedication and commitment’ in their communities as part of the fight against HIV/AIDS. The winner will receive a $5,000 donation in their name to one of the selected causes, with the three individual stories that receive the most nominations publicized around the world on the CARES Initiative website.

Potential winners can be nurses, healthcare workers, national coordinators, lab scientists and even clinicians; or lay people who are active in community outreach work. This could include a social worker providing AIDS counselling.

CARES supports the UNAIDS 90-90-90 target to ensure that by the year 2020, 90% of people living with HIV will know their status, 90% of those with diagnosed HIV infection will receive sustained antiretroviral therapy, and 90% of all people receiving antiretroviral therapy will have viral suppression.

It focuses on providing innovative solutions for the monitoring of HIV and AIDS treatment. CARES was inspired by the work of Professor Debbie Glencross, a South African laboratory pathologist, who found a different and less expensive way to measure a patient’s CD4 count*.

While this is intended as an international award, in its first year, the award will focus on recognizing the dedication of people in Africa, one of the areas in the world most affected by HIV/AIDS. The 2017 award will be launched at the annual meeting of the African Society for Laboratory Medicine (ASLM), a pan-African professional body aiming to improve laboratory services.  ASLM2016 is being held at the Cape Town International Convention Centre, Cape Town, South Africa, from December 3-8, 2016.

Samuel Boova, Beckman Coulter’s Director Alliance Development, High Burden HIV Markets, said: “The award is to give a platform to the work and stories of those we see as the unsung heroes of individual communities. These are people who have shown individual dedication, commitment and courage or who have made a difference in the battle against HIV/AIDS.

“However, it is not just the final winner we want to publicly recognize. We hope the award will encourage communities to learn about and honor the work of every nominee, so that more people will come forward to help and support those living with HIV/AIDS.”

Nominations must first be made via the CARES website. Once a name has been nominated, the local community will be given the opportunity to vote in support. People with the greatest number of votes will be put forward for the final assessment panel.  Rules of entry and full details are available in full from http://www.beckman.com/cares.

Mr Boova gave the following examples of ordinary people who support their local communities in the field of HIV/AIDS. “We are looking for dedicated and committed individuals like these who work in the community helping others to live with, and manage, the disease,” he added.

The first example is how a young HIV positive woman in Uganda was inspired and empowered by a community charity, PINA (People In Need Agency), to rebuild her life and become an advocate herself for young people living with HIV. This was the objective of PINA when it was first set up

by a local case worker – to work with young people, helping them overcome the stigma of living with HIV and rebuild their self-esteem.

Mr Boova also pointed out that there are many women in rural Africa who walk miles every day to see patients to ensure they are compliant with their medications. Medication alone does not help without the commitment of these women – and they have to walk many miles between patients each day and every day, whatever the conditions.

Prof Lesley Scott, PhD: an applied scientist in laboratory medicine in the department of Molecular Medicine and Hematology at the University of the Witwatersrand, Johannesburg, South Africa. Head of research and development for the National Priority Program of the National Health Laboratory Service and Laboratory Director for the AIDS Clinical Trails Group.

Francesca Celletti: a global health expert, with a focus on innovations and health systems, global health initiatives and HIV/AIDS. She is the Vice President, Innovation and New Technology for the Elizabeth Glaser Pediatric AIDS Foundation (EGPAF) and was previously one of the Coordinators of the Health Systems cluster in the World Health Organization.

Maurine Murtagh: the CEO of the International Diagnostics Centre at the School of Hygiene & Tropical Medicine, London, UK. She is also a consultant specializing in diagnostics for global health working with the World Health Organization, the Bill & Melinda Gates Foundation and UNITAID, among others. Previously, Director of Diagnostic Services at the Clinton Health Access Initiative (CHAI).

Ana Teasdale: the Senior Adviser for Strategic Initiatives for the Pangaea Global Aids Foundation where she advises the CEO and Leadership Team on new and current programs and strategies, particularly in integrating HIV and broader women’s health priorities, and liaison with the international community. She was previously at Susan G. Komen (Komen), Catholic Relief Services (CRS), and at the National Democratic Institute for International Affairs (NDI

Dr Venter is the Deputy Executive Director of the Wits Reproductive Health and HIV Institute at the University of the Witwatersrand, Johannesburg. He leads multiple antiretroviral treatment optimization studies, and has an active interest in public sector access to HIV services. He previously led large HIV programmes in South Africa funded by the U.S. President's Emergency Plan for AIDS Relief (PEPFAR) which focused on truckers and sex workers.