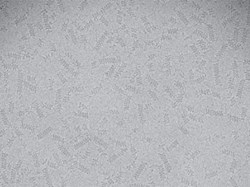 A new study describes how an interdisciplinary team of Cornell researchers used a state-of-the-art microscopy technique to reveal protein structures and key steps of a CRISPR-Cas system that holds promise for developing an improved gene editing tool.

Eventually, these findings could lead to a reliable CRISPR-Cas system that allows scientists to insert larger cargoes of genetic information into cells with more precision than current techniques allow, with far-reaching implications for research and for treating human disease.

The research focuses on CRISPR associated transposons, a group of bacterial ‘jumping genes’ that have incorporated naturally occurring CRISPR-Cas systems that bacteria use to recognize and disable viruses.

The study, “Structural Basis of Target-site Selection in RNA-guided DNA Transposition Systems,” which published July 15 in Science, reveals important – and previously uncharacterized – mid-steps in the process.

“We figured out the huge missing link of how this process happens in such a way that we can now engineer it to have a better chance of it actually working in human cells,” said Joseph Peters, professor of microbiology in the College of Agriculture and Life Sciences, and a co-senior author of the paper.

“There’s a lot you can do with protein design that’s based on a structure because when you understand the physics of how everything interacts, then that allows you to modify that system with precision and accuracy,” said Elizabeth Kellogg, assistant professor of molecular biology and genetics in the College of Arts and Sciences and the other co-senior author of the study. “Now that we have a picture of how it’s operating in its functional cycle, we can start to modify that.”

In nature, bacteria use CRISPR-Cas systems in their immune defense. All of the CRISPR systems utilize CRISPR RNA as a guide, though the specifics of how each system locates its targets vary greatly. RNA, the molecule most often used to transmit genetic information from DNA to proteins, has been modified to serve as a guide to direct CRISPR-associated proteins (Cas proteins) to a precise string of viral DNA. Once located, Cas proteins cut the DNA and disable the virus. Over the last decade, scientists have co-opted CRISPR-Cas systems to edit genes, by cutting DNA at precise locations and inserting engineered sequences.

Transposons, or jumping genes, first discovered in the 1940s by Nobel Prize-winner Barbara McClintock ’23, M.A. ’25, Ph.D. ’27, have the ability to hop and replicate in the genome. Peters discovered in 2017 that some transposons have adopted CRISPR-Cas bacterial immune systems, which they use to transfer genetic material between bacteria and across bacterial species. This study focuses on a type of CRISPR-Cas system adopted by a transposon that holds promise for developing a new gene-editing technique that can deliver a larger payload of genetic material with greater efficiency and accuracy than current methods.

Kellogg’s lab specializes in the use of cryo-electron microscopy. In the study, Kellogg and colleagues assembled the proteins of interest in various functional states along the pathway and then flash froze them, trapping them in place. Once frozen, they imaged the proteins with an electron microscope that provides near-atomic scale resolution.

“By trapping different functional states, we can visualize the whole cycle of how a transposon works,” Kellogg said.

Prior to this work, no one understood how transposons insert genetic material in a single orientation at a precise distance from a targeted genetic sequence. Other researchers have shown that a protein called TnsC is responsible for selecting a target site in this system. Kellogg’s structures revealed that in the presence of ATP (a molecule that cells use for energy) TnsC proteins form helical filaments that grow in one direction and wrap around a stretch of DNA, searching for an insertion point. The filament stops growing when it encounters another protein, TniQ, which appears to protect the last TnsC molecule in the chain from searching. The transposase then disassembles the helical filament.

At this point, that last TnsC molecule functions like a ruler to control the spacing of where the CRISPR-Cas system inserts, just downstream of TniQ, where it transfers its payload of genetic material.

The researchers also found that the elements insert in a single orientation, which simplifies the process when it comes to genomic engineering.

In future work, the team has already begun to explore incorporating protein designs to modify the process, so it may eventually be adapted for human cells.

Jung-un Park, a doctoral student in Kellogg’s lab, is the first author of the paper. Ailong Ke, professor of molecular biology and genetics in the College of Arts and Sciences, is a co-author.